Can you identify this chirpy creature? Readers’ nature queries

Ethna Viney on a Cork chrysalis, parasitic flies and a spiky cat lover 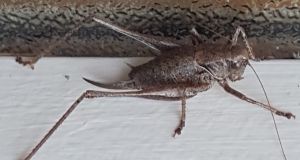 Can you identify this creature, which I found on my hall door? – Conor Rush, Tramore, Co Waterford
It’s a female bush cricket.

I took this picture of a chrysalis in Allihies, west Cork. It had golden-coloured inclusions that sparkled in sunlight. Can you identify the moth or butterfly it will become? – Robert Gumbleton, Innishannon, Co Cork
It’s the chrysalis of the red admiral butterfly.

This creature was in our house at the beginning of the month. It was about 12mm long. – Joe Dwyer, Monkstown, Cork
It looks like one of the ichneumon parasitic flies, whose larvae hatch in the larvae of other insects. From its size it’s possibly the common Diplazon laetatorius, which lays its eggs in hoverfly larvae.

I saw this tiny young lizard lying motionless on the bog road. When my dad picked it up to put in the grass for safety it started moving a little. I hope it survives. – Riona Ní Aodha (10), Indreabhán, Co na Gaillimhe

It’s a young smooth newt, not a lizard. Smooth newts breed in water during the summer months and the adults leave the water in July, hunt nocturnally and sleep and later hibernate under stones or at the bottom of compost heaps. The young develop into tadpoles and small newts in the water. Yours has probably just emerged.

We are currently feeding three stray kittens at our house in the east Cork countryside, and recently a new friend joined them for tea. Harry the hedgehog was very keen on some leftover barmbrack. – John Dunne, Ballybane, Co Cork