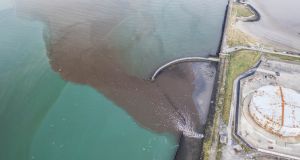 If there are major delays in building a large waste water treatment facility in north Co Dublin, it will add to difficulties at Irish Water’s overloaded plant at Ringsend, according to a water specialist based at DCU.

A legal challenge to the Greater Dublin Drainage (GDD) project, which includes a new treatment plant at Clonshaugh, was likely to lead to additional sewage discharges into Dublin Bay, predicted Dr Jenny Lawler of DCU Water Institute – Irish Water has been granted permission by Bord Pleanála for the development. Dr Lawler collaborates on research with Irish Water and Fingal County Council.

A legal challenge to the project, which involves piping treated water to Portmarnock and conveying it via an undersea tunnel to a discharge point north east of Ireland’s Eye, would result in “more failures” in Ringsend, Dr Lawler said.

This was likely to occur in spite of major upgrades to the Ringsend plant which serves a population equivalent of 1.9 million, as major population increases will occur in the Dublin region, and the facility has to cater for all sewage, rain water and storm water in the region.

In the absence of the Clonshaugh plant, “you would have worries that Ringsend will be put constantly under pressure. It’s the victim of the Dublin drainage system.”

When there are overflows after a period of heavy rainfall for instance, the plant is in effect by-passed and partially treat sewage goes straight into the sea, resulting is “shocking scenes” seen regularly in the bay.

Dr Lawler said treated water just does not disappear; it has to be discharged into a river or the sea. Where the best available technology was deployed such as tertiary treatment combined with UV or filtration, the kind of problems currently associated with Ringsend were unlikely.

She disagreed that a series of smaller plants would be a better option that GDD, as they would end up being more expensive and need the same number of people to run them as in a bigger facility.

While Dublin Bay was in the shape of horse shoe with low levels of circulation as a consequence, the GDD discharge point was out beyond this which reduced pollution risk, she confirmed.

Campaigners from Portmarnock, Clonshaugh, Malahide, Abbotstown, Blanchardstown, Baldoyle and Howth, are consulting legal and environmental experts on how best to challenge the decision by way of judicial review, their spokeswoman Sabrina Joyce-Kemper confirmed.

Their action would be based on what they believe to be contraventions of the EU Habitats Directive, the Birds Directive and special areas of conservation at Rockall and Dalkey, she said.

“We have a panel of experts, marine and microbiologists, all of them agree the GDD project will kill life in the sea. Heavy metals will accumulate in shellfish, habitat will be destroyed, during both the construction process and operational stages.

We aren’t just being nimby about this. It’s not just our back yard – this is the Irish Sea we are talking about, it’s everyone’s back yard. The sea is a finite resource and deliberate pollution not only impacts habitats and marine life, but tourism, fishing and human health.”

Following Bord Pleanála’s decision, “Irish Water will progress with a detailed design and contractor procurement process”, it said on Thursday. “As part of the further development of the design, the GDD project team will be conducting surveys in the project area over the coming months.”

“Irish Water will liaise closely with local communities in advance of and throughout construction of this essential project,” a spokeswoman said.

It was working to ensure additional wastewater treatment capacity needed across the north Dublin area “is delivered on time by the mid-2020s”.

“Construction of the new wastewater treatment plant at Clonshaugh, the associated orbital sewer and pumping station, and the marine outfall is estimated to take three years and will begin, at the earliest, in 2022.

“Testing and commissioning will take place in 2025. It is intended that the new Clonshaugh wastewater treatment plant and associated infrastructure serving greater Dublin will become fully operational from 2026,” she added.