May 27th, 2019: Not only are the pollutants we generate contributing to the climate catastrophe we are hurtling towards, they are also costing us cold hard cash every single day. 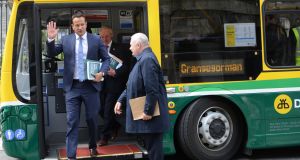 The Government has outlined a highly ambitious plan to cut Irish carbon emissions on a sustained basis up to 2030, which will be backed by annual increases in carbon tax.

The plan includes major policy shifts to enable a rapid decarbonisation of the State within 12 years, including targets for putting 1 million electric vehicles on Irish roads; retrofitting of 500,000 homes and achieving 70 per cent renewable energy in power generation.

The Climate Action Plan to Tackle Climate Breakdown was launched yesterday by Taoiseach Leo Varadkar and Minster for Climate Action Richard Bruton at an event at Grangegorman in Dublin attended by most of the Cabinet.

It contains 183 actions that the Government claims will help Ireland meet exacting 2030 EU climate emission targets, as well as a new commitment to make Ireland 100 per cent carbon neutral by 2050.

The measures will be enshrined in new climate legislation while new structures in Government will ensure greater oversight. This includes setting five-yearly carbon budgets which will set emissions targets for individual sectors, with penalties where emissions exceed limits.

Mr Bruton said the plan would involve “radical change in the way we do things”. However, he said the major actions represented a “step-change” in policy that would greatly accelerate Ireland’s commitments over the next decade.

Mr Varadkar was careful to play down the coercive elements of the plan and said it would involve “nudging people and business to make the right decisions”.

Opposition parties criticised aspects of the plan as weak on detail, with Green Party leader Eamon Ryan especially critical of the transport elements of the plan. The Greens also criticised the absence of any costing for many key measures such as afforestation, retrofitting homes and a modal shift in transport.

But some environmental campaigners welcomed the announcement. Friends of the Earth said it was the “the biggest innovation in Irish climate policy in 20 years”.

“The key is not simply the measures themselves, but the new mechanisms to ensure we actually deliver them,” its director Oisín Coghlan said.

Minister for Finance Paschal Donohoe said the outcome of public consultation on how best to use revenues from carbon tax would be considered in advance of the 2020 budget. No decision had been made on “pacing” increases in coming years but the €80 per tonne target was adopted.

Meanwhile, the chairman of the Climate Change Advisory Council, Prof John FitzGerald, will today warn the Government that changes to the price of carbon will have “significant implications” for a range of State investments.

In an address to the Oireachtas Committee on Budgetary Oversight, he will call for the Government to take account of the building industry’s capacity to deliver in relation to the major programme to retrofit homes.

“The expertise and skills need to be developed to undertake this work and this may take some time,” Prof FitzGerald will say.