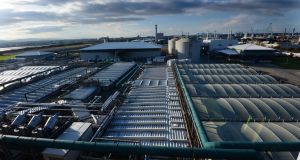 Irish Water said the Clonshaugh plant was necessary because the Ringsend facility is operating at over capacity. Photograph: Cyril Byrne

Campaigners opposing a wastewater treatment plant in North Dublin intend to mount a legal challenge against the development after it was granted permission by An Bord Pleanála.

On Wednesday, Irish Water received approval to build a €500 million sewage treatment plant in Clonshaugh, east of Dublin Airport, despite more than 14,000 objections.

Sabrina Joyce-Kemper, from Portmarnock, who is part of the campaign opposing the development, said local residents and campaigners will not accept the decision.

“This plant will have the capacity to dump 300 million litres of waste water every 24 hours just off Ireland’s Eye and will have a catastrophic effect on the Dublin Bay biosphere,” she said.

“We’re ready to initiate a judicial review in the High Court and after reading the Board’s decision, [we] feel that they have left themselves open to legal proceedings by failing to appropriately assess the project under the EU Birds and Habitats Directives.”

Ms Joyce-Kemper said the group accepts the sewage network is “under pressure”, adding that they are “willing to help Irish Water find another solution, but this isn’t it”.

The group are fundraising to cover the cost of the legal proceedings and have “a number” of celebrities supporting them, including singer Damien Dempsey.

The project, which will process the waste of 500,000 people, will involve the construction of an underground pipeline beginning at Blanchardstown which will collect and transfer sewage, via a new pumping station at Abbotstown, north of the M50, to the plant at Clonshaugh.

The treated water will be discharged to the Irish Sea through a 6km marine outfall pipeline from Baldoyle to a point 1km northeast of Ireland’s Eye.

The project also includes development of a regional sludge treatment centre at the Clonshaugh site and an associated biosolids storage facility at Newtown near Kilshane Cross.

In response to the planning board’s decision, Irish Water said the plant was necessary to cater for future population growth and because the Ringsend facility is operating at over capacity.

Damian Cassidy, a Ringsend resident, said he was disappointed by the planning board’s decision because he has seen how a wastewater treatment plant can affect a community.

“All summer, the people of Ringsend, Booterstown, Sandymount, they were unable to use the sea water. There was a bar on swimming, there was a bar on boating in certain areas,” he said. “It has brought nothing other than tears and sadness.

“I feel worried about the people in Clonshaugh, Sutton and Howth because there’s a fishing industry out there and there’s swimming and boating. If they experience what we did in terms of pollution of water then that’s at risk.”

Meanwhile, Dublin Chamber, an organisation representing businesses in the capital, welcomed the decision.

Mary Rose Burke, chief executive of the group, said wastewater infrastructure is “critical” to citizens and businesses, but systems are currently operating at capacity.

“The past few weeks – which have seen 600,000 Dubliners subjected to boil water notices – are evidence of the need to invest significantly in the city’s ailing water infrastructure,” she added.