Life after peat: Men of the bog – and proud of it 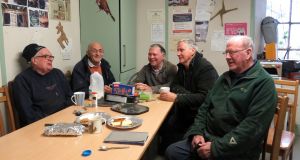 A few kilometres south of Edenderry, near the Offaly-Kildare border, a Bord na Móna power plant is pumping blue smoke out of a red and white chimney. It has done so for two decades.

But the days of that distinctive smoke plume in the sky are numbered. Edenderry has a licence to operate until 2023. Yet following the announcement that the ESB-owned peat power plants at Shannonbridge in Co Offaly and Lanesborough, Co Longford, are to close at the end of 2020, there are fears it might be wound down sooner.

Meanwhile, Bord na Móna is to exit peat production by 2025, leading to the closure of 21 bogs across the midlands.

The total number of direct jobs at risk is in the region of 2,000, an Oireachtas committee heard this week, with a further 2,000 indirect jobs potentially affected.

For the five men gathered in Edenderry’s Men Shed what is at stake as Ireland moves into a post-peat era is more than jobs; it’s an entire way of life. Here people have cut and foot – the back-breaking work of building the sods into architectural stacks – their own turf for generations.

Everyone in the group heats their home using turf bought from private contractors. “You’re talking about maybe 10 tonnes” of turf per household at a cost of around €600 every year, says retired Bord na Móna contractor Dick Glennon.

Tom O’Toole pulls up a photo on his phone of his two sheds, each of them piled from floor to ceiling with turf. There’s enough there, he says, “to keep me going for six winters”. But no one knows how long people here will be able to go on sourcing and burning turf.

Working the bog has been a community effort for generations, says Charlie Talbot, a “Dublin blow-in” here for the past 19 years. “People enjoy it. To take the bogs off the people is wrong. Is the Government going to compensate them?”

He thinks there’s a degree of denial in the region about what’s to come. “People know the end of the bogs is coming, but they don’t believe it’s really going to happen.”

Even without the threat of climate change theirs is a way of life that was vanishing. They grew up at a time when the only employment options in the region were with the ESB or Bord na Móna – known locally as “the Bord”. A recruitment ad from the 1940s illustrates some of the attractions on offer to Bord na Móna workers. “Don’t emigrate,” it says. “Villages are being built to provide family life.” High earnings, abundant meals, football, dances, cinema, spring beds and bed linen are among the perks promised.

These days young people are more likely to look for work in tech companies in Leixlip or Dublin. They are not interested in the bog, says Bryan, who got his own start footing turf at the age of 10 or 11.

“I’ve kids in their 30s and 40s, and ask them to come out and rear the turf with me? No way. They say if they won the Lotto they’d get Roadstone to come and tarmac the bog.”

Glennon believes “it’s the people in their 40s and 50s who will be worst affected” – too far from retirement age for the redundancy payment to see them through, but too settled in their jobs to want to retrain.

Now it is not just the direct employees whose livelihoods are at stake. “Everyone is nervous about the discretionary spend going,” he says.

Brendan O’Neill is the owner of a plant hire company in Edenderry which has begun to diversify into bicycle and lawnmower sales. “This town was built predominantly on Bord na Móna. They’ve been very good employers, and the mainstay of the community. To find a replacement for them will be a huge chore.”

Bord na Móna is diversifying into other areas, including wind and solar farms, fish farming and herb growing. There is scepticism locally about Government plans to replace the jobs lost with green energy programmes or roles retrofitting midlands homes under the Just Transition initiative.

“They’re talking about 400 jobs in retrofitting homes; they might as well make it 800 because it won’t make any difference to Bord na Móna workers,” says Eamon Dooley, a former Bord na Móna employee and Fianna Fáil councillor.

“These guys are machine operatives. They’re not craftsmen, carpenters, plumbers, electricians. If I was a Bord na Móna worker losing my job I wouldn’t hang my hat on trying to get a job retrofitting houses.”

He feels the midlands is being asked to pay “a heavy price” for the rest of the country. “The greenhouse gas emissions from agriculture in this county is 32 per cent. Peat is less than 9 per cent.”

Privately, however, people in the region acknowledge the validity of climate arguments against cutting and burning peat. “It took us the last one hundred years to destroy what it took nature one hundred million to create,” says one businessman in Edenderry, who doesn’t want to be named.

Not everyone is despondent about Offaly’s future in the post-peat era. Rebekah Keavney, environmental representative for Offaly Public Participation Network ( which links the local authority with community groups), sees climate change as “a huge opportunity”.

“All of the things that were an obstacle to Offaly’s growth have been pivoted around by climate change. We’ve got assets like peatlands. We have the potential to be the biggest carbon sink in the country. There is an opportunity to have an education and carbon research centre here.”

The future for the bogs themselves can be seen 50 minutes’ drive south. The bog at Abbeyleix is one of the few that has been left largely undisturbed after local protesters blocked efforts by Bord na Móna to deepen drains in 2000. Later a boardwalk was built with the help of the local community, and the meandering walkway across the bog’s otherworldly surface is popular with walkers and natural lovers.

“It takes about 1,000 years to develop one metre of bog. Bord na Móna takes out about a metre or two a year in some places,” says Chris Uys, development officer with the Community Wetlands Forum and possibly the world’s only Irish wetlands enthusiast from Namibia. “At the time when Bord na Móna started cutting turf there was no alternative source of fuel in the country. But you get to a point where you have to realise this is not sustainable.”

Abbeyleix bog is some eight metres deep and about 8,000 years old. It has begun growing a spongy moss called sphagnum again, “a wonder plant” which can store up to 25 times its own weight in water.

Uys says peatlands like this are recognised carbon sinks, and our most effective natural anti-flood measure. The destruction of swathes of them has contributed to “problems of flooding in the Shannon region. Nobody ever wants to talk about that.”

For him the future of this region lies in the bog, just as it always has. He believes there is an opportunity to attract investment in peatland restoration by private companies who want to offset their carbon footprint, an initiative already in practice in Germany and the UK.

“If we rewet all of our peatlands we can cut our carbon emissions by 4.5 per cent. The effect is immediate.”