State urged to buy 4,000 acres of Luggala estate for public use 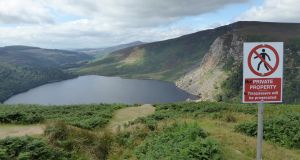 Looking over Lough Tay, with Luggala Mountain on the right. It has been noted that 'private property' signs have been appearing around the Co Wicklow estate in recent weeks. Photograph: Mountaineering Ireland

Mountaineering Ireland has appealed to Minister for Culture Josepha Madigan to acquire the uplands surrounding Luggala estate in Co Wicklow for the public’s recreational use.

The representative body for hillwalkers and mountaineers notes that “private property” signs have been appearing around the Co Wicklow estate, formerly home of Garech de Brún, in recent weeks.

The ashes of the Guinness family member and founder of Claddagh Records – who died in March – are to be scattered at Luggala on Friday.

The invitation-only event will be addressed by President Michael D Higgins.

Guests also attending may pass some of the signs denoting “private property”, up to 10 of which have appeared along a 2km stretch of roadside overlooking Lough Tay in the past fortnight.

Mountaineering Ireland is seeking a meeting with Ms Madigan. While the late Luggala custodian welcomed walkers on to the estate, it fears that a change of ownership could jeopardise public access.

The 5,000-acre estate including Luggala Lodge has been on the market since last year with a quoted price of €28 million.

The 18th-century hunting lodge’s incumbent hosted an eclectic range of guests ranging from The Chieftains and The Rolling Stones to actors Charlotte Rampling and Siobhán McKenna, writer Brendan Behan and Scottish poet Hugh Mac Diarmid over the years.

Earlier this year it was reported that businessman Denis O’Brien was an interested purchaser, but a source close to Mr O’Brien said on Thursday there has been “no update” on this.

Mountaineering Ireland believes that State acquisition of the 4,000 acres of upland could be negotiated for a far lower sum than that quoted for the whole estate, as much of the mountain area is sensitive habitat.

It is bordered on three sides by the Wicklow national park – with increased access to same after de Brún sold 1,600 acres to the State in 2006 for the sum of €1.7 million.

The National Parks and Wildlife Service (NPWS) had recommended last year that the State buy 4,000 acres of the ancestral Guinness property because of its “strategic importance” to the State lands and its tourism potential.

Freedom of Information records released to the Sunday Times show this was recommended after officials from Ms Madigan’s department and the NPWS had viewed the estate in February, 2017.

Ms Madigan’s department said that “given the limited resources available for capital investment”, the Minister “recognises the need to focus on the core responsibilities relating to the management of the existing parks and reserves’ lands”.

“Whilst the estate at Luggala would be a significant addition to the stock of publicly owned heritage properties and land providing a central connection between disparate parts of our Wicklow Mountains’ National Park, the department could only consider acquiring this property if the price fell to within a certain range, or in the context of a donation or bequest,” it said, and added that this was “known to the vendors”.

“The Luggala estate has allowed a permissive access to a hugely popular walking route down to Lough Dan for many decades and the Minister hopes this would continue under any new ownership arrangements,” the department said.