Only 8% of Irish beaches, rivers and harbours found to be ‘clean’ 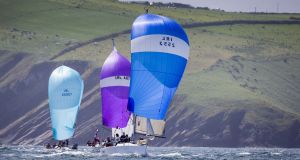 Kinsale, Co Cork. An Taisce has singled out the harbour in Kinsale as being “remarkably free of litter for a busy harbour attracting lots of tourists”. File photograph: David Branigan/Oceansport

Only 8 per cent of Irish beaches, harbours and rivers surveyed by Irish Business Against Litter were found to be “clean” in its first evaluation of the levels of rubbish in coastal areas and waterways throughout Ireland.

The level of litter being found in scenic areas and some of the country’s best-known resorts will damage the tourism sector, the environmental group has warned.

In response to the findings of what will become an annual survey, IBAL concluded one of the most successful tourism initiatives every undertaken in Ireland – the creation of the Wild Atlantic Way – could be undermined by the levels of litter found in scenic spots along the route that runs along the western seaboard.

Cork Harbour and Doolin Pier in Co Clare are classified as the worst “litter blackspots”, according to the survey published on Monday.

An Taisce, which surveyed the areas on IBAL’s behalf, found only four of 50 areas were deemed to be “clean to European norms”. This is in contrast with IBAL’s most recent survey which classified 75 per cent of Irish towns and cities as “litter free”.

Just one beach, at Salthill in Galway, was deemed clean, which was considered “notable for an virtual absence of litter” throughout the beach area, promenade, changing and parking areas. The popular resorts of Lahinch and Bundoran were both littered. The monitoring of beaches, harbours and rivers, and their immediate environs, was conducted during the summer.

“We know the success of the Wild Atlantic Way is placing strains on infrastructure of various kinds. Litter is a likely consequence of this and local authorities need to ensure the appeal of the way is sustained,” said IBAL spokesman Conor Horgan.

Parts of the upper Shannon was assessed as clean but the river at Portumna, Co Galway (along with the river Suir in Waterford) were “heavily littered”.

“Sadly, accumulations of litter in and around waterways are a common sight in Ireland and this is borne out by these disappointing results,” Mr Horgan said.

He added: “If we can call our towns clean, we cannot say the same for the areas around our beaches and rivers. It took 10 years of naming and shaming for local authorities to get to grips with litter in our towns. IBAL has set about pushing for a similar turnaround in respect of coastal areas and waterways.”

The objective of this new campaign was to rid coat coastal areas and waterways of litter as they were central to the country’s appeal to visitors and and an integral part of the clean image Ireland projects, Mr Horgan said. “Aside from this commercial motivation, our research brings into focus the broader issue of marine litter and the need to stem the vast amounts of plastic and other litter which entering and killing our oceans.”

The most common forms of litter found by assessors were plastic bottles, cans, cigarette butts and sweet wrappers.

On this issue, Mr Horgan said: “We are a small island and often subject to wet and windy weather. When someone casually drops a plastic bottle or cigarette butt on the street, the likelihood of it being blown into a local river or swept into a drain to then enter the sea is very high.”

This litter was not just unsightly but contributing to “lasting, potentially irreparable damage to the planet”.

An Taisce singled out Kinsale Harbour as “remarkably free of litter for a busy harbour attracting lots of tourists”. In contrast, assessors cited large accumulations of litter including wood pallets, plastic containers and big pieces of plastic in the area of Blackrock Castle in Cork Harbour. The pier at Doolin was criticised for “high levels of litter and dumping” which was “very unpleasant” for tourists visiting the area.