Plea to anglers to stop fishing due to high temperatures 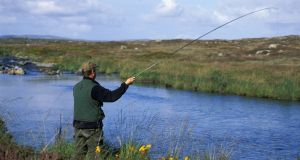 Inland Fisheries Ireland have appealed for anglers to stop fishing until the current period of high temperatures and low water levels comes to an end.

The high temperatures mean fish are increasingly stressed and there is less oxygen in the water, posing problems for catch and release angling.

The current conditions in many rivers mean fish caught with the intention of being released afterwards, are more likely to die out of the water.

On Thursday, Inland Fisheries Ireland called for all salmon angling to be voluntarily suspended during the period of drought. The State agency said if current weather conditions continue it may consider emergency conservation orders.

The emergency order would prohibit salmon angling on certain rivers, until the threat to fish health subsided.

John Chambers, chair of the Irish Federation of Pike Angling Clubs, said angling competitions across the country had been cancelled due to the weather.

“If you catch a pike in this sort of weather, the pike will be much more stressed out, and the chances of it recovering when put back into the water are a lot less,” he explained.

Water levels in rivers were much lower than normal due to the lack of rain over the past two weeks, he said. This meant fish were pooling in deeper parts of rivers, and would be easier to catch in large numbers “for those less conservation minded” anglers.

The fisheries agency is concerned the low water levels and high temperatures may also lead to fish kills.

With pike angling, when a fish is caught the angler may have it out of the water for 10 to 15 minutes, to weight it, or take a picture with it, Mr Chambers explained.

In the current weather the fish would be more distressed, and “more likely to die” out of the water, he said. This would apply “across the board” to catch and release angling, he said.

Often “keep nets” are set up during competitions, which is a portion of net near the bank of a river where caught fish are kept in the water until the end of the day. Temperatures in the water are hotter near the banks, and Inland Fisheries Ireland have called for the practice to be suspended.

He said the current high temperatures would not affect the farms when it came to hatching fish, which happened once a year around October.

“We would have chillers to cool down the water if it was too hot,” when hatching the fish, he said.

But the hot weather was having an effect on the current fishery stock, he said. “The fish are very stressed. At the minute we’re not feeding them as much, so they’re not growing as much,” he said.

Once the spell of exceptional warm weather and drought passes there should not be any knock on effects for the fish farm, he said.