Rehabilitation of bogs, creation of national seed bank and protection of sealife among commitments 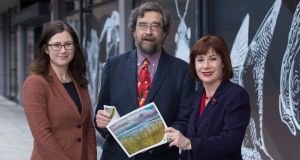 A series of 40 actions to address a biodiversity crisis facing Ireland have been announced by a coalition of Government departments, State agencies, environmental organisations, private sector and community groups.

The commitments were agreed to under the ‘Our Seeds for Nature’ charter following the first National Biodiversity Conference, which took place in Dublin Castle and attended by more than 500 delegates.

The commitments include improving habitats and addressing the scale of endangered species by actions that “go beyond the respective organisations’ current work programmes to support, scale up and fast track the implementation” of the National Biodiversity Action Plan.

Among the actions committed to by the Department of Agriculture was to increase uptake of the Native Woodland Conservation Scheme five-fold during the lifetime of the National Forestry Programme.

The Office of Public Works is to establish a national seed bank conserving Irish flora in the National Botanic Gardens, while the EPA to fund 10 biodiversity and natural capital projects and provide seed funding to five community-based wetland restoration projects.

The Department of Culture, Heritage and the Gaeltacht is to work with the City and County Manager’s Association in tackling invasive alien species at a local level. It will also work with An Garda Síochána in combating wildlife crime.

Coillte is to restore Hazelwood Forest, a 130-hectare woodland in a special area of conservation on the banks of Lough Gill.

The Heritage Council has undertaken to expand the Heritage in Schools Programme to second level, with a particular emphasis on biodiversity.

The Department of Communications, Climate Action and Environment is “to greatly improve knowledge of protected species (especially whales and dolphins and seabirds) and sensitive habitats” in collaboration with the National Parks and Wildlife Service (NPWS).

Minister for Heritage Josepha Madigan said it was time to roll-up sleeves in support of biodiversity conservation.

“Biodiversity in Ireland is facing significant threats and challenges,” she said, adding that the commitments “show we can work together” to implement a shared vision for nature.

The scale of habitat loss and endangered species in Ireland is such that it requires a €50 million investment in the NPWS, Green Party Senator Grace O’Sullivan said. “We need to invest in the important work of the NPWS. We need to protect the nature we have and bring in policies to restore what we had before.”