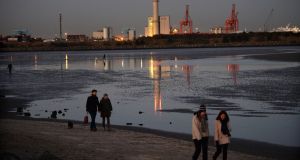 Merrion Strand and Sandymount Strand in south Dublin were among a number of bathing waters found to be of poor quality last year, according to the latest report from the Environmental Protection Agency (EPA).

The EPA said 132 out of the 142 bathing waters assessed in 2017 met the minimum required standard of sufficient quality, with the majority of these being either excellent or good.

The EPA said management measures will need to be identified and implemented for these areas.

Temporary restrictions are in place at Sandymount Strand and Merrion Strand due to suspected sewage discharge from a water waste treatment plant.

The public has been warned by Dublin City Council not to swim at the beaches due to a sewage pollution incident following a power outage at the Spencer Dock pumping station.

The EPA report said there were issues with water quality and a substantial number of the country’s rivers, lakes and estuaries were not as healthy as they should be, while a significant proportion of sites still had too much nutrients.

The report states a quarter of rivers and lakes and just under a third of estuaries and coastal waters were failing their environmental quality standard or assessment criteria.

“High levels of phosphorus in the northeast of the country are impacting on lake water quality, while high nitrogen concentrations in the south and southeast are impacting on the quality of many of our estuaries,” it said.

The EPA said there had been a serious and continuing deterioration in river water quality in the northwest of the country and that further investigations were required to find the causes and identify actions required to address it.

The report also said faecal bacteria was detected at 42 per cent of national groundwater monitoring sites in 2016, “highlighting the necessity for testing of drinking water supplies from groundwater for microbial contamination and for the provision of adequate treatment”.

Dr Matt Crowe, director of the EPA’s office of evidence and assessment, said making sure waters were clean and well protected was critically important to health and wellbeing.

“Water also supports many important economic activities such as agriculture, manufacturing and tourism,” he said.

The EPA said despite significant progress in dealing with serious pollution events, the number of high-quality rivers had almost halved since the late 1980s, from 618 to 361.

The agency said even more worrying was the reduction in pristine river sites, which was fallen from 584 to only 23 over the same period.

“Substantial efforts will be required to ensure that further loss of these sites can be halted and where possible reversed,” it said.

“The EPA will work with local authorities and other stakeholders to help identify the local pressures impacting on these high-status waters and to formulate solutions,” he said.