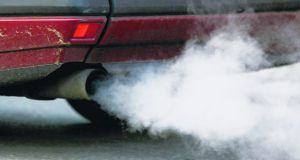 A proposal to set up a new Oireachtas committee to track Government progress on addressing climate change and implementing radical measures to counter global warming proposed by the Citizens’ Assembly, is to be considered on Wednesday.

The Joint Oireachtas Committee on Communications, Climate Action and Environment (CCAE) has recommended the move. It would require secretaries general – the most senior civil servants – to account for their department’s delivery on climate change commitments.

A document submitted by the CCAE Committee to the Sub-Committee on Dáil Reform recommends the new committee commence sittings in September and conclude its work by the end of the year, when a report would be prepared for the Oireachtas.

The proposal follows a request from the Oireachtas Business Committee, which asked the CCAE committee to evaluate how the legislature should respond to the Assembly’s recommendations.

It also suggests the committee be given “a specific mandate to consider how the Assembly recommendations might influence the drafting of a national energy and climate plan (NECP) which the Government is currently formulating, as required under the new EU governance arrangements.

In light of on-going failures to meet Ireland’s targets on reducing carbon emissions and adopting renewable energy, it is understood this report will need to build considerably on the National Mitigation Plan adopted last year, if it is to be approved by the EU. It has to be drafted by the end of the year and finalised by the end of 2019.

If approved, a special budget allocation from the Oireachtas Commission would be required for the contracting of a small team, with expertise in European Climate policy and specific mitigation sectors to assist the Committee in their work, said Green Party leader Eamon Ryan.