‘If you can make energy from wind, why not from rain?’ 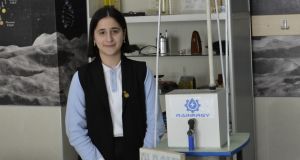 Reyhan Jamalova: “We designed Rainergy to produce electricity from the rain, to solve the problem of energy deficiency in rainy and low-income countries”

Impact Journalism Day 2018 (June 16th, 2018) is dedicated to solutions-based journalism, sharing stories of positivity and innovation. As a member of the Sparknews alliance of 50 international media outlets, The Irish Times brings you stories of solutions to global and local issues. For more information see impactjournalismday.com.

She is just 15 years old, but has already designed a smart device that generates electric power from raindrops. Reyhan Jamalova, a ninth grade student at the Istek Lyceum in Baku, Azerbaijan, came up with the idea for Rainergy after her father wondered: “If you can make energy from wind, why not from rainwater?”

Rain is one of the last unexploited energy sources in nature. When it rains, billions of litres of water can fall, which have enormous electric potential if used in the right way.

“We designed Rainergy to produce electricity from the rain, to solve the problem of energy deficiency in rainy and low-income countries,” says Jamalova, whose motto is: “Light up one house at a time.”

Jamalova and a friend, Zahra Gasimzade, assisted by their physics tutors, worked for four months running calculations and developing a device to harvest energy from rainwater. The State of Azerbaijan underwrote the initial costs of building it, 34,100 Azerbaijani manats (€17,172). Rainergy has since attracted interest from other investors, in particular from India.

The nine-metre-high instrument consists of four main parts: a rainwater collector, a water tank, an electric generator and a battery. The collector fills the reservoir with rainwater that will later flow at high speed through the generator to produce energy. The generated energy is stored in the battery, and can relieve pressure on the local power grid by providing communities with an additional source of electricity. The team has developed two prototypes. One lights up three LED lamps while the other produces enough electricity to light 22 LED lamps for up to 50 seconds using only seven litres of rainwater. Jamalova says that underprivileged communities can use Rainergy to power items such as street lamps.

Another advantage of the Rainergy device is that it stores energy in a battery, so that it is effective even when there is no rain

Rainergy’s competitors for renewable energy include solar panels, wind turbines and piezoelectricity (which results from subjecting some solids to mechanical stress). Most of these alternatives require substantial investment, labour and energy, or electricity experts to build and operate them, whereas the Rainergy device has a relatively simple design.

“Our model is much more efficient in comparison with similar systems,” explains Jamalova, noting that piezoelectric rain generators produce only 25 microwatts of power. Rain-harvested energy emits 10g/kWh of CO2 during electricity production, which Jamalova claims is “very low compared to alternative energy solutions”.

Another advantage of the Rainergy device is that it stores energy in a battery, so that it is effective even when there is no rain.

Rainergy was first presented at the Global Summit of Entrepreneurship in India in November 2017. While Rainergy’s creators originally conceived of the device for regions of Azerbaijan with the heaviest rainfall, they are aiming to market it internationally – especially since, as Jamalova says, “Azerbaijan is not a rainy country”. In countries such as the Philippines, India, Malaysia and Indonesia, where monsoon rains are frequent, this device could be a perfect solution for reducing dependence on power lines and improving access to electricity. Twenty-one per cent of the population in India and 11 per cent in the Philippines lack access to electricity, according to the Global Tracking Framework 2014 report.

“In the future, we want to create a business based on this device,” says Jamalova. For now, the invention has landed its young creator on the Forbes 30 Under 30 Asia list 2018 – the first Azerbaijani person in history to make the rating.