What is this moth with beautiful markings? Readers’ nature queries

Ethna Viney on butterflies, spiders, a rose with many buds and a visiting pine marten 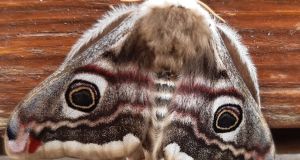 I found this moth on our patio door. It’s got beautiful markings. – Frank Kennedy, Aughrim, Co Galway
It’s the male emperor moth, which can detect a female up to 2km away. There have been several reports of sightings.

This visiting pine marten actually put its nose to the window pane while I was having breakfast. It wandered around and then disappeared up the field. – Martin Nestor, Barefield, Co Clare

I saw this butterfly in Leopardstown and I’ve never seen one like it before. – Peter Sheehan, Stillorgan, Co Dublin
It’s the male orange tip butterfly. The female doesn’t have orange tips.

We found these little fellows on the window outside the house. They looked like bits of yellow flowers but they spread out and there were hundreds of little yellow spiders. – Catherine Mooney, Aughinish, Co Galway
They are the offspring of the common garden spider, Araneus diadematus. They’ll get eaten by birds.

I saw this beautiful large moth early in the morning on a lamp post. It was so handsome with tan-coloured feelers. – Penelope Dickson, Kimmage, Dublin 6W
It was the lime hawkmoth. The base colour can vary from buff to green or orange brown. Eoghan Daly from Clontarf also sent a photograph of the lime moth.

We were surprised to see this unusual daisy on our local green. – Holly and Sam Burns, Co Wicklow

My mother found this multi-headed rose bud in her garden recently. – Deirdre Hannon, Thomastown, Co Wicklow
These are what’s known as fasciation, a condition that can happen for many different reasons: genetic change, bacterial or viral infection, damage to the plant’s growing point and several others. The results are sometimes prized and encouraged by plant growers.

Ethna Viney welcomes observations and photographs at Thallabawn, Louisburgh, Co Mayo, F28 F978, or by email at viney@anu.ie. Include a postal address please.