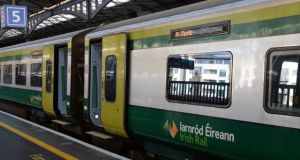 A major new strategy unveiled for the capital on Thursday has been welcomed by the Dublin Commuter Coalition. It includes further restrictions on cars, large-scale bus diversions and a widespread reallocation of road space to pedestrians and cyclists.

Coalition chair Kevin Carter said he expected to see “pushback on such drastic proposals” but welcomed the approach.

“We must prioritise what little space we have to move as many people as possible. In normal circumstances that would be fulfilled by public transport, but in this new world that job has to be fulfilled by walking and cycling,” he said.

Once public activity returns to the city, bicycle-use is expected to triple and walking to double, according to the strategy document. Public transport use is expected to fall by as much as 80 per cent in line with social distancing requirements while car-use could fall by 30 per cent.

However, the Commuter Coalition qualified its support for the approach by stressing the importance of plans such as BusConnects and the Greater Dublin Area Cycle Network, as well as continued investment in public transport.

The new plan, however, is likely to draw considerable support from cycling advocates who have long agitated for more expansive and safer infrastructure.

The Dublin Cycling Campaign, also welcoming the development, noted similar pushes in other cities – for instance London pursuing a tenfold increase in cycling and Paris building 650km of new cycleways.

“The way people move around the city will need to fundamentally change in response to social distancing requirements,” it said.

“The measures being proposed will be vital for making cycling a safe and comfortable option for the thousands of people who will be new to cycling in the city.”

Last February it emerged that Ireland had the highest annual increase in deaths of cyclists among all EU member states over a nine-year period.

The study by a leading EU transport safety body said deaths of cyclists rose by an average of 8 per cent annually between 2010 and 2018, almost four times the rate of the next worst countries.

The Dublin Cycling Campaign said the other three Dublin councils need to follow suit with plans that would enable an expansion of safe cycling.

Efforts to change how traffic system work are ongoing. Dún Laoghaire-Rathdown County Council has said it will introduce a one-way traffic system in the south Dublin village of Blackrock by the end of the month in order to ensure safe public distancing during the Covid-19 emergency. That will also see space reallocated for pedestrians and cyclists. However, while cautiously optimistic, many campaigners may be concerned by the temporary nature of such plans.

“This shouldn’t be a political or ‘green’ issue: there simply isn’t any other way to bring enough people into and around the city if public transport is at 20 per cent capacity,” he said. “It’s got to be cycling and walking.”