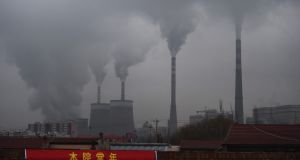 Smoke belching from a coal-fueled power station near Datong, China. During July and August, China’s emissions were 2.7 per cent higher than the same period last year. Photograph: Greg Baker/AFP via Getty Images

Global emissions fell by 8.8 per cent in the first half of the year amid restrictions on movement and economic activity owing to the coronavirus pandemic, according to a new report.

The various lockdowns around the world and the consequent economic recession reduced carbon dioxide emissions by 1.6 billion tonnes from January to June - the equivalent of the past three years of UK greenhouse gas emissions.

The study published in Nature Communications was based on analysis by more than 40 scientists of real-time data including electricity consumption, flight information and industrial output.

“This is more dramatic than the financial crisis,” said Hans Joachim Schellnhuber, director emeritus for the Potsdam Institute for Climate Impact Research, and an author of the paper. “It is wartime reductions, it is unparalleled in the period where we have reasonable data.”

The plunge in emissions was reflected in a massive contraction in global economic output, which is expected to fall by 4.4 per cent this year, according to the IMF, the worst since the Great Depression of the 1930s.

However, the study showed emissions were starting to rise from their lockdown levels, particularly in China, which relaxed restrictions much earlier than did Europe and the US.

During July and August, China’s emissions were 2.7 per cent higher than the same period last year, as normal economic activity has returned.

In the UK, emissions during July and August were just 1 per cent below the levels of the previous year, while the US had emissions that were 11.6 per cent lower than normal during that period.

The biggest drop in emissions during the first half of the year came from ground transportation and aviation, while household energy use saw a very slight increase during lockdown as more people stayed at home.

Slow down in growth

Overall, energy use fell in the first half of the year, with the International Energy Agency warning this week that the long-term effects of the pandemic were set to usher in the slowest decade of worldwide energy demand growth since the 1930s.

But despite the decline in emissions, scientists said it was unlikely to make a difference to long-term rising temperatures on the planet, which has warmed about 1C over the past century.

“Unfortunately, the climate protection impact will be almost negligible,” said Prof Schellnhuber. Even though carbon dioxide emissions are lower than usual, the concentration of carbon dioxide in the atmosphere is still increasing due to continued fossil fuel consumption.

“It makes almost no difference in global warming. Maybe one-hundredth of a degree difference, probably even less,” he said.

A growing number of countries have pledged to reduce emissions to close to zero by the middle of the century, in a bid to limit global warming to well below 2C, the goal of the Paris climate accord. – Copyright The Financial Times Limited 2020