Martin says he hopes Government will achieve carbon neutrality by 2050 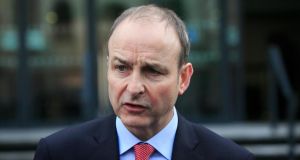 Taoiseach Micheál Martin has said that unless the Government acts now on climate change, Ireland will reach a point of no recovery.

Taoiseach Micheál Martin has said that unless the Government acts now on climate change, Ireland will reach a point of no recovery.

Speaking at the publication of the draft Climate Action Bill, Mr Martin said he hoped the Government would win a consensus for rapid practical action to reduce carbon emissions by 7 per cent each year and achieve carbon neutrality by 2050.

Referring to the recent David Attenborough documentary in which the renowned veteran naturalist reflected on the damage done to the planet during his lifetime, Mr Martin said it reminded us once again how important and diverse the environment is.

“We have seen the damage caused by climate change,” he said. “The need for action is now. Unless we act now, we may well reach the point of no recovery.”

Minister for Climate Action Eamon Ryan said that the Bill was a central part in the Programme for Government which commits to emissions reductions of at least 7 per cent per annum.

“We can in the next three decades rid ourselves of fossil fuel. There is a biodiversity crisis and a climate change crisis. By tackling one we can tackle the other..

“By 2050 we will be carbon neutral. The Bill sets out the steps we need to take to get there and then sets out how we can take each step.”

He said the Bill would only work if all parties across the Oireachtas cooperated and the role played by the all-party climate action committee, chaired by Brian Leddin, would be crucial.

“This is not a one-government process. This is going to happen over the next five or six governments in a row.”

Tánaiste Leo Varadkar said it was a piece of landmark legislation. He said part of the mission of the coalition was to accelerate climate action in Ireland.

“We face a twin crisis, the crisis of Covid-19 and the crisis of Brexit. We are also facing a twin twin transition. That transition is digital and it is green. I am fully behind this Bill.”

Mr Ryan outlined the main features of the Bill, including three five-year carbon budgets, seeking decarbonisation from each sector, and setting it out with emissions reductions.

He said the Bill would strengthen the role of the Climate Advisory Council and give it real power in terms of setting out carbon budgets.

Asked about if there would be sanctions against the Government if the targets set out in carbon budgets were not met, Mr Ryan said that such targets were justiciable and there was a legal obligation on Government to meet its own targets.

“It will take the guts of a year to get through the entire process.

“This will be a huge challenge and it is not going to be an easy process.”

He said he did not want it to slip into 2022 before the carbon budget became operational.