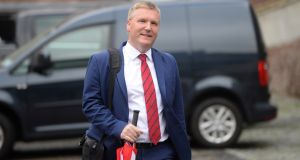 Minister for Public Expenditure Michael McGrath: he was told Ireland will almost certainly face significant financial penalties because targets on renewable energy are unlikely to be met

Minister for Public Expenditure Michael McGrath has been given a gloomy assessment of Ireland’s chances of meeting targets set out in a draft plan on energy and climate change.

Mr McGrath has also been warned that the plan would see the transportation and construction sectors forced to pay the price for a failure to deal with emissions from agriculture.

The warnings were contained in a brief prepared for Mr McGrath when he took office during the summer, but had been redacted from the versions that were made public.

The briefing said Ireland will almost certainly face significant financial penalties because targets on renewable energy are so unlikely to be met under the plan.

It also said that the current draft National Energy and Climate Plan (NECP)”assumes unprecedented uptake rates” in a range of schemes to meet targets.

“In addition, since energy efficiency works are labour intensive these projected targets will require a multiplication of the level of trained workers in the sector.”

Mr McGrath was also told the energy and climate plan ignored the potential for significant changes in agriculture to help meet targets on harmful emissions into the environment.

And it said other sectors – primarily transportation and construction – would be left to pick up the slack from the lack of ambition on agriculture.

“By leaving the source of nearly half – 46 per cent from agriculture – of non-ETS ( EU emission trading system) emissions broadly unchanged, this means that the relative burden of a 30 per cent total emissions reduction becomes much higher on those other major emitting sectors of the economy (transport and buildings) which are themselves responsible for less than 50 per cent of emissions.”

The report said renewable energy in 2020 was just 13 per cent, and that even with inclusion of all the measures in the Climate Action Plan – and using conservative estimates of energy and emissions growth – the country would still miss targets in 2022, 2025, and possibly 2027.

The briefing explained: “As these targets are legally binding the submission of the draft NECP to the commission as currently drafted all but assures that Ireland will face a significant new compliance cost to the exchequer to ‘make up’ our shortfall in performance towards these milestones.”

The warnings had been redacted from the original publication of the briefing but were released following a request under Access to Information on the Environment Regulations.

A spokeswoman for the Department of Public Expenditure had no comment to make.