Ambitious climate action Bill set to dictate how we live

Law will affect every element of society, with binding five-yearly carbon dioxide limits 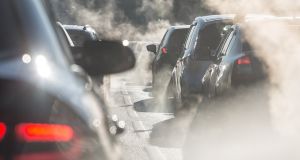 All major sectors will be subject to a cap on carbon pollution. File photograph: Getty

Major change can come wrapped in dull civil service language. The Climate Action and Low Carbon Development (Amendment) Bill 2020 is one such milestone.

Complex and difficult to explain, it will, however, dictate how each of us live in the decades up to 2050 – how we work, how we move, the food we eat, the ways we travel, and how often.

Every element of society in the State will have to obey legally-binding five-yearly carbon dioxide limits. Every citizen will be affected.

The legislation’s publication came as the Copernicus weather service confirmed that September 2020 was the warmest on record globally; 0.05 degrees hotter than September last year.

Last year’s figures for September had been another record-breaker. Scientists say it is a clear indication of temperatures being driven up by emissions from human activity.

A consequence of the Bill means every big investment by the State and private enterprise will have to factor in its carbon footprint. All major sectors, and every new building, will be subject to a cap on carbon pollution in the form of CO2 – or methane from agriculture.

Although the concept of emissions ceilings is probably intangible for most people, Minister for Climate Action Eamon Ryan believes it will transform Ireland fundamentally.

How might that be the case? It is about rewarding those reducing the carbon intensity of their actions, leading to a better quality of life and cleaner environment marked by less air pollution.

But Ryan insists in tandem with this will be supports for the less well-off and a just transition process that assists workers whose jobs are no longer fit for purpose in a green economy; think Bord na Móna workers in the midlands and ESB workers in Moneypoint power plant. There will be many more.

It will be far from painless but early adapters will receive most benefits, and those who persist with fossil fuel use, whether it’s driving a diesel car or using home heating oil, will feel the hit of rising carbon taxes.

The scale of the challenge is immense; the start out point is a scenario of rising emissions – many modern economies have already forced the rising curve downwards whereas Ireland’s decarbonisation record is deplorable by any yardstick, especially for a wealthy state.

The driving mechanism will be those carbon budgets that will more than match annual fiscal budgets in significance, and enhanced governance structures to keep big ambitions on track. A strengthened Climate Advisory Council will propose national and sectoral limits to be adopted by government while the all-party climate action committee provides key oversight.

It will not be simply a matter of telling certain businesses or farmers they have to cut emissions by a set amount, it also sets out a roadmap on how this will be achieved. In agriculture, redirection of the sector will be agreed, tied into a wider national land use plan.

Is this realistic in light of Covid-19 and the distinct possibility of a hard Brexit? The next two years will be arduous in that regard, but there are obvious easy wins such as getting out of peat extraction and accelerating renewable energy development, especially offshore wind.

Ireland is matching European ambition; the latest manifestation of which is a European Parliament vote for a 60 per cent emissions reduction by 2030. The Bill coincides with the EU climate law coming into force, enshrining the climate neutrality goal by 2050 in European legislation backed by a more ambitious 2030 target. Irish intent is clear but rigorous enforcement has to be applied and sustained delivery achieved before we can be regarded as a climate leader.