Norway’s Arctic communities lament the end of the seal hunt 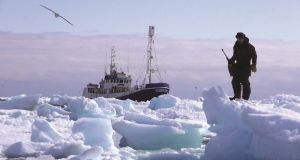 Espen Brandal on an ice floe with the MS Havsel in the background.

Espen Brandal’s face is puffy and red from more than a decade spent on freezing Arctic seas. From summer to winter he mans a cargo vessel along the shores of southern Norway, but every April, until last year, Brandal would swap ship and embark on a dangerous voyage out west.

He and a small crew of seal hunters sailed more than a 1,000km to ice fields in the Greenland Sea known as the West Ice. When they’d return two months later, the crew would have hunted and slaughtered about 3,000 doe-eyed harp seals.

Brandal (30) is one of the last Norwegians skilled in the ways of sealing. He is also one of a handful of people who can navigate the dangerous West Ice, where currents and winds can shift at a moment’s notice, leaving boats trapped or crushed.

“On a normal workday we follow the sunlight. We wake up at sunrise and usually finish up on deck when the sun sets,” he says. “The seals sleep on the ice during the day and feed in the ocean during the night.”

Once seals are caught, they are brought back to the boat, gutted and cleaned, and their meat is tightly packed in the hull. The work is gruesome – two main arteries must be slashed to drain blood from the body – and bone-achingly arduous and repetitive; and then there’s the freezing polar air.

Commercial sealing in Norway, however, is almost at an end. One boat – or perhaps none – will leave port from Tromso in Arctic Norway to hunt this year. For the first time, Brandal won’t be taking part.

Photos and footage of hunters vigorously clubbing seal pups in the 1980s and 1990s marked the beginning of the end. The outside world was appalled, and public opinion quickly turned against sealers and the governments that supported them. Since then, a combination of activism, an end to government subsidies and plummeting demand have driven the industry to the edge of extinction.

One of northern Norway’s last hunts was the subject of a 2016 documentary film, Sealers: One Last Hunt. In it, Brandal plays a starring role as first mate aboard the MS Havsel, appearing alongside Bjorne Kvernmo, the grizzly captain, and a small crew of hunters.

The film presents an unadorned picture of how the kill unfolds. A spotter watches for movement on the ice from a platform high up on the ship’s mast. He signals to a shooter on deck who, from the bow of the boat, fires off a high-powered round, killing the seal as it rests.

A trained “jumper” then runs out across the moving ice floes, smashes the seal’s skull with a blow from a hakapik and thrusts a spike deep into the animal, in case the rifle round didn’t do its job. All this takes place under the watchful eye of a government veterinary inspector who monitors every move from on board the boat.

“I get irritated when people think that Norwegian sealing is a brutal and mindless hunt,” says Brandal. “We are professional seal hunters and euthanise the animal in a humane way. We follow Norwegian law during the hunt.”

The film is beautifully shot, and the dramatic and brutal wilderness of the Greenland Sea is almost palpable. In one scene, a bleary-eyed Brandal carefully balances a bowl of soup while sliding along a bench as the ship rolls wildly during a storm.

Viewers are left with little doubt of where the producers’ sympathies lie. “Many people who eat chicken, beef and pork are against sealing, and that’s just so contradictory. If you are going to eat meat, then this is a pretty ethical way to do it,” says Gry Elisabeth Mortensen, one half of a pair of filmmakers who spent two months at sea documenting the hunters’ lives.

Three hundred and fifty kilometres north of the Arctic Circle, Tromso owes its very existence to the harvesting of seals and whales. In 1955, almost 300,000 seals were caught and processed in Norway, many through Tromso, the so-called “capital of the Arctic”. Seal skin was, and still is, used to make boots and clothing in Norway; the meat is eaten locally and across the country.

“Seal tastes closer to beef than anything else, but it’s dryer,” says Jan Bremner Klev, proprietor of the upmarket Skarven restaurant. “We use the back – the loin – as it’s the best cut.”

Situated close to Tromso’s docks, Skarven has a rustic feel that harks back to a time of discovery. Given the town’s deep historical links to seal hunting, you might expect seal meat to be standard fare among locals. You’d be wrong. Skarven is one of the last restaurants in town serving seal and whale meat.

In recent years hunters weren’t helped by the fact that much of the West Ice used by harp seals failed to form. The 2016 season saw hunters waste two months sailing from Tromso to the coast of Greenland: when they arrived, they were greeted by rain – and no ice.

Sealers are bitter towards animal-rights activists whom they say are ill-informed and responsible for destroying their businesses and a centuries-old way of life. The anti-seal hunting campaigns of the 1970s by Greenpeace and others, they say, destroyed the livelihoods of dozens of indigenous communities – European Union citizens – in Greenland.

In a part of the world where employment opportunities are already scarce, the collapse of the seal industry has been a massive blow. Greenpeace issued an apology to Inuit communities in Canada in 2014, saying: “Our campaign against commercial sealing did hurt many, both economically and culturally.”

But by then it was too late for the wider industry. A year later, Norway ended state subsidies for hunters. Today, demand for seal products has never been lower.

From a small village where the only current indication of its sealing history is a museum, Brandal is determined that the traditions around hunting remain alive. “The experience of manoeuvring and navigating in the ice will die out since sealers are the only ships that actively search out ice and operate in it,” he says. “I would be sad to see the art of navigation in icy waters disappear.”