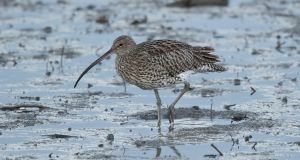 Thirty field officers are to be recruited as part of an ongoing campaign to safeguard the Curlew, the species of large wader bird which is found in several counties but now close to extinction in Ireland.

With its distinctive long legs, neck and bill and a greyish brown colouring with dark streaking, concerns have been growing about the Curlew’s survival – since the late 1980s as many as 5,500 pairs are estimated to have diminished to no more than 150.

According to a 2020 report by the National Parks and Wildlife Service (NPWS) which runs the conservation programme, that represents a decline of at least 96 per cent. At that rate, it warned, the species could die out within the next 10 years.

The ongoing conservation project sees teams search out and protect nesting areas and, critically, engage with landowners and local communities on their importance.

The programme has focussed on nine of the most important areas in Ireland for breeding including the Stack’s Mountain in Kerry, Lough Ree in Roscommon and Mayo, and various areas of counties Leitrim, Monaghan, Donegal, Laois and Kildare.

Minister of State with responsibility for the NPWS Malcolm Noonan described the current status as “one of the most difficult and pressing conservation concerns of our time”.

“The Curlew is a link with the wild Ireland of past generations, and the farmers and landowners who support our remaining breeding populations of Curlew are vital to its future,” he said.

Bolstered by a cash injection from the Department of Agriculture, efforts to immediately hire 30 contract field staff comes at a critical time, just before the Curlews return to their breeding grounds in spring.

Last year, 42 breeding pairs were confirmed, of which at least 26 reached hatching stage with a minimum of 57 chicks hatched. At least 14 pairs produced fledglings, putting the breeding success rate at a minimum of 33 per cent.