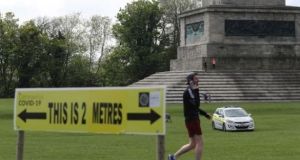 The Phoenix Park Transport and Mobility Options report contains a plan to see a bus service introduced to the park for the first time. Photograph: Nick Bradshaw

Major curbs on traffic are set to be introduced in Dublin’s Phoenix Park - including road closures, entry restrictions, and speed limit reductions - under a long-term strategy to cut commuter traffic through the park.

The Phoenix Park Transport and Mobility Options report aims to improve facilities for pedestrians and cyclists and restrict through-traffic in the park, with the exception of Chesterfield Avenue. The plan would also see a bus service introduced to the park for the first time.

Last March, the Office of Public Works (OPW) restricted car traffic in the park by closing most gates, with the exception of the Castleknock and Parkgate Street entrances, to encourage compliance with the Covid-19 2km travel restrictions.

Both gates remained open to allow the continued use of Chesterfield Avenue as a through-road and to maintain access for park residences, such as Áras an Uachtaráin and the US ambassador’s residence, as well as Garda Headquarters.

The OPW last June announced its intention to keep the peripheral gates shut to “curb traffic volumes” and maintain “safe, quiet, open spaces for pedestrians and cyclists to enjoy”.

However, the following month it reopened all gates on the orders of the newly appointed Minister of State for the OPW Patrick O’Donovan, who highlighted the inconvenience to commuters of the peripheral gate closures.

The OPW did however commit to beginning public consultation on a new plan to limit traffic in the park.

The new report recommends closing just one gate to cars: the Cabra gate. It will become a park exit for the new bus route, which will run from Heuston Station and serve the Zoo and the Phoenix Park Visitor Centre, terminating at the Broombridge Luas Station.

However, while the other five peripheral gates will remain open at Ashtown (which will become entry-only), North Circular Road, Knockmaroon, Chapelizod and Island Bridge, a system of cul-de-sacs and road closures will be introduced.

These will allow visitors to reach the car parks which provide 1,350 spaces, and will allow access to the residences and work places in the park, but will prevent people from using these entrances to drive through the park.

Chesterfield Avenue will remain open to through traffic, but speed limits here and throughout the park, will be reduced from 50km/h to 30 km/h. Pedestrian crossings will be introduced along the length of Chesterfield Avenue.

The cycle lanes created last year by removing parking along Chesterfield Avenue will be retained and the amount of cycle lanes in the park would be increased from 17km to 31km. Existing cycle lanes and footpaths would also be upgraded.

Public consultation on the strategy will begin on January 29th for six weeks. The full strategy is expected to take up to seven years to implement and will progress in three phases.

However, the OPW said it intends to pilot some of the measures before the summer, including the cul-de-sac arrangements on Upper Glen Road, near Chapelizod, and North Road, which runs parallel to Blackhorse Avenue.

Separately, the OPW will review the park bylaws with a view to strengthening its powers to stop illegal parking particularly on footpaths and the grass.

The new strategy will “protect the biodiversity and landscape fabric of the park” and “will encourage more sustainable ways to access the park and seek to reduce commuter traffic,” the OPW said.