Cyclist and pedestrian route to be permanent at Grangegorman in Dublin 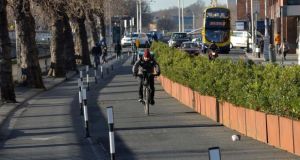 Some 60 per cent of survey respondents supported the cycle and pedestrian path being made permanent. File photograph: Photograph: Alan Betson

The permanent closure to through traffic of the main road outside the new TU Dublin campus at Grangegorman, to improve cyclist and pedestrian safety, has been overwhelmingly endorsed by city councillors.

A trial of the “filtered permeability” system at Grangegorman Lower, which uses bollards and temporary planters to block cars but allow cyclists to pass, has been in place since last July as part of Dublin City Council’s response to the Covid-19 pandemic.

The measure has been divisive, with some motorists claiming it had increased their journey times, residents in a number of surrounding areas concerned traffic would be displaced to their roads, and some Grangegorman residents unhappy to take more circuitous routes to reach their homes by car.

However, 60 per cent of respondents to the council’s public consultation process supported the trial.

Traffic surveys conducted before the trial found a “high volume of motor cars travel through this residential area” despite 60 per cent of households in the Grangegorman area not having access to a car and a majority either walking or cycling for their own commute, the council said.

During the trial cars that had been travelling at average speeds of 60km/h – twice the legal limit for the road – had reduced their speed to 37km/h, and “rat-running” to the quays had ended.

There was, the council said, a “misconception” that traffic congestion on the North Circular Road was being caused by the trial. These traffic delays were actually caused by pedestrians being given greater priority and shorter wait times at traffic lights to avoid “bunching” on pavements to facilitate social distancing, it said.

Sinn Féin’s Séamas McGrattan, the only councillor to oppose the scheme said he did not accept the trial was not responsible for congestion. “My concern has always been the impact on surrounding roads,” he said. “ It’s not a misconception there are delays, there is increased traffic at surrounding junctions.”

Labour councillor Joe Costello supported the project but disputed the characterisation of the road as a rat run. “There has never been rat running; this had always been a normal cut-through route.”

Green councillor Janet Horner said the trial had been “hugely positive” particularly for local children and making it permanent would allow focus to move to other areas.

Fine Gael councillor Ray McAdam also said it was important the project would not be seen in isolation and traffic calming was needed in surrounding areas.

Councillors agreed the council’s engineering department would work over the next year to offset any adverse impact of the road closure across Phibsborough, Cabra and Stoneybatter. This would include measures to reduce rat-running, tackle illegal and unsafe parking, reduce commuter parking, cut vehicular speeds, reduce traffic volumes, enhance pedestrian and cycling opportunities, and ensure integration with the BusConnects plans.