Dublin Zoo’s new baby gorilla comes out for the sunshine

Dublin Zoo's new baby western lowland gorilla, has been seen outdoors by the public for the first time as it took to the sun in the arms of her mother Kafi accompanied by father Bangui on their island enclosure at Dublin Zoo. Video: Bryan O'Brien 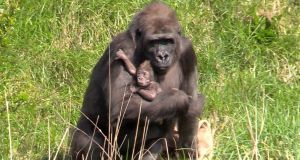 Dublin Zoo’s new baby gorilla took a trip outside with his mother on Wednesday as members of the public got an opportunity to see the nine-day-old ape for the first time.

The baby gorilla has still not been given a name because zookeepers have been unable to determine his or her sex.

The baby’s 12-year-old mother Kafi is keeping her offspring so close to her chest that it has not been possible yet to say if it is male or female.

James Creighton, keeper at Dublin Zoo with responsiblity for apes, said Kafi was a first-time mother so staff were a bit concerned about her readiness but “she is doing everything right” in looking after her baby.

Dublin Zoo is hoping to have a naming competition in the coming weeks.

Helen Clarke-Bennett, who is the team leader of the African Plains, said Kafi, who arrived at Dublin Zoo in 2012, had witnessed other female gorillas give birth and nurse their young, and that had been a help in teaching her how to look after her own baby.

“This new birth is a great step forward for this critically endangered species,” she said.

The baby is the 11th gorilla to be born in captivity in the zoo since a breeding programme began in the 1980s.

The term ‘silverback’ is used because of the silvery white hair on an alpha males’ back and hips.

Bangui was quickly accepted as the new alpha-male of the troop and has begun his transformation into a ‘silverback’ gorilla.

“It helps that he came from a very good social grouping. He has seen youngsters being born. It’s all very hopeful for settling in with our group. It’s a high-pressure job,” Ms Clarke-Bennett said.