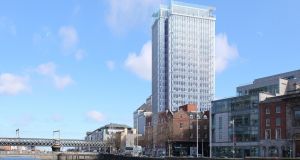 Artist’s impression of Tara House, intended to be a “landmark gateway” marking the transition between Dublin’s historic core and the contemporary architecture of Docklands.

Often controversial developer Johnny Ronan, now well out of Nama, is lodging plans to build the tallest building in Dublin on a site adjoining Tara Street railway station, topped by a restaurant and bar with panoramic views over the city.

The proposed tower would rise to a height of 88m (nearly 290ft), compared to 59m (194ft) for Liberty Hall, just across the river Liffey, which was Dublin’s tallest building for decades until it was outstripped by Monte Vetro, the Google HQ in Grand Canal Dock, at 67m (220ft).

Designed by HJL Architects, Tara House is intended to be a “landmark gateway” marking the transition between Dublin’s historic core and the more contemporary architecture of Docklands. It would also provide a new entrance to Tara Street station, via a “pedestrian colonnade” at street level.

The 17-storey tower would stand on a five-storey wedge-shaped podium, with the same facade treatment, which is designed to relate to the height of existing buildings on Tara Street. This would contain a 110-bedroom hotel, with an open restaurant/cafe terrace at the base of the office tower.

Altogether, the scheme would provide 11,800sq m (127,000sq ft) of floorspace for its three different elements, with the top-floor restaurant and bar having an unusually tall floor-to-ceiling height of 4.6m; this would be expressed as a “lantern” in the proposed architectural treatment.

HJL chairman Paul O’Brien pointed out the design of the tower evolved from a lengthy series of modelling studies over the past 18 months. “We went through various permutations in terms of assessing impacts on 45 key views, even though there are no such views listed in the Dublin city plan.”

The panel concluded the architectural aim should be to “achieve a timeless design, rather than a flashy ‘icon’ [as part of a strategy] to make this building so obviously different from anything else in the city that it has to be assessed as a special case, not just another commercial development”.

Given that the building – a “skyscraper” in the Dublin context – would be visible from so many places, notably the playing fields of Trinity College, the panel said it “would need to be of the highest design quality, a jewel on the skyline . . . to deflect criticism of the effect of the tower on other city landmarks”.

But Dr McParland, a Trinity fellow, regretted Dublin City Council providing for a tower on the Tara Street site though its George’s Quay Local Area Plan. Although the proposal had “intrinsic design quality”, he believed it would “harm the settings” of the Custom House, Trinity and views from College Green.

The panel proposed that the “public benefits” of the scheme could be enhanced by opening up the hotel terrace to the public and permitting schoolchildren to visit the penthouse restaurant at certain times, “thereby making the experience of the building something that relates to the life of Dubliners”.

The review also recommended that low-iron glass should be used to “help the tower read as white rather than black in daytime light”. And while it would be “easier to work with the site free of Kennedy’s” – the listed pub on George’s Quay – “this would only make the scheme more controversial”.

Paul O’Brien said the pub, currently with an arresting artwork on its gable, was like “a lone tooth in the mouth”, but had to retained as a protected structure. And while it would be given new “wings” to fill out the site, its very existence means that the tower would be set back some distance from the corner.

An earlier CIÉ scheme for a bulbous 11-storey tower would have been “much bulkier” than the current proposal, according to Mr O’Brien. By contrast, the latest proposal has a much more satisfactory “slenderness ratio” – rated as 1:3.4 – and “blade-like” aluminium fins would emphasise its verticality.

Mr O’Brien, who has worked on several projects for Mr Ronan, believes the final design is “defensible in terms of architecture and the public realm”, even on a street as hostile as Tara Street, with its huge volumes of traffic. “The issue will be the perception of height in the area,” he said.

The building would be “pulled back” to create an exceptionally wide 9m footpath, with a circular pattern of paving evocative of the Hill of Tara. From there, Dart users would be able to enter the railway station, which is sadly down-at-heel despite a number of “renovations” over the years.

Overall, the proposed high-rise element would be significantly lower than the 32-storey building proposed for a site opposite Heuston Station or the Watchtower planned for Point Village, neither of which was built. Its construction might also inspire Siptu to restore Liberty Hall, Dublin’s first “skyscraper” in 1965.