Mixed retail and office space will have bar, restaurant and completely reworked plaza 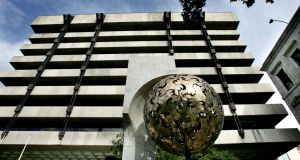 Mannix Flynn says plans would bring the concept of the building back towards what was originally envisaged by architect Sam Stephenson. Photograph: Matt Kavanagh

The renovation of the Central Bank building in Dublin is to include a top-floor restaurant and bar with panoramic city views and a complete reworking of the famous Dame Street plaza.

Sources have indicated that early pre-planning concepts for the seven-storey structure will see it remodelled into a central “destination” for the capital with a mixture of office and retail space in what was previously an impregnable banking fortress.

Mystery has surrounded the fate of the building, which was sold last January, but it now appears a pending concept design will see the removal of railings and the lowering of the plaza space to street level.

It is also envisaged to illuminate the structure by night and open it up into a more welcoming gathering space for the public.

The scheme, which is to be designed by architects HJL, will comprise open-plan offices and retail space.

None of the conceptual designs have yet been unveiled but sources with information on the project have said it will be a “refreshing” boost to the city.

The building, designed by Sam Stephenson, was bought by the international real estate firm Hines and the Hong Kong-based real estate investment company Peterson Group in a deal reportedly worth about €65 million, which included two adjoining buildings.

The tower, which dates from 1979, turned out to be 29ft (almost 9m) higher than it should have been. Its roof trusses were subsequently clad in bronze and left exposed, before the roof was fully enclosed in the early 1990s.

The plaza was later surrounded with neo-baroque railings at the main entrance, a feature now likely to be reversed.

In a statement, Hines said planning designs for the project were at feasibility and design stage and said it would be premature to comment further.

Since the acquisition, it and the Peterson Group have been “exploring opportunities for the long-term enhancement of the Dame Street site and have been engaging with local stakeholders”.

It has filed for planning permission to redevelop one of the adjacent buildings at 6-8 College Green.

Although plans for the Central Bank have been kept tightly under wraps and have not been finalised, an outline is due to be presented to local councillors at a meeting in May.

One of those councillors, Mannix Flynn, responding to reported plans to redevelop the plaza, saying such a move would bring the concept of the building back towards what was originally envisaged by Stephenson.

He said the building later gained a sense of being private property through the addition of steps up from the Dame Street footpath, while elements of antisocial behaviour had also crept in.

“It just became a place that you would walk through and avoid rather than sit down,” he said.

“Originally this idea of the plaza, going back about 40 years, was that it would be a pedestrianised public place and it was the first [such concept in Dublin] of its kind.

“Stephenson was a renowned architect and the controversy in relation to the height overshadowed a very modern breakthrough in architecture that it was.”