Cameras had been repeatedly vandalised and are at risk of further damage, says council 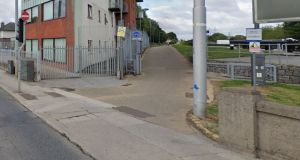 A section of the Grand Canal cycling path at the Naas road junction. Image: Google Maps

CCTV cameras on the Grand Canal that have been repeatedly vandalised are to be reinstated following a spate of attacks on cyclists using the route.

South Dublin County Council, which has responsibilty for the maintenance of the 8.5km path, said it will bring the cameras back despite fears they will be subject to “further damage in the future” due to “ongoing serious vandalism” along the canal.

The canal path running from 12th lock on the canal at Lucan to the third lock in Inchicore was opened in 2010 at a cost of €25 million.

A substantial element of the budget was spent on the installation of 66 CCTV cameras and 300 computer-monitored lights.

However, the cameras and the lights have suffered repeated vandalism at certain sections of the canal, with many no longer operating.

Cycle campaigners have long warned about safety on the canal cycle path. However, violent attacks and thefts by gangs of youths, some armed with iron bars, have recently increased.

In the last fortnight two cyclists were attacked in separate incidents by teenage gangs on the Bluebell section of the path, west of Inchicore and south of Ballyfermot. Both cyclists said they were assaulted with metal bars. In one case an electric bike was stolen.

Gardaí said they are conducting “high visibility beats” along the canal in the Inchicore area.

These beats will continue in the run-up to Christmas, but the council said it will also improve its safety monitoring along the canal.

“Parts of the infrastructure, particularly lighting and CCTV, have been subject to serious vandalism. Arrangements are being made to bring this infrastructure back into operation,” the council said.

“Due to ongoing serious anti-social behaviour these works are not without difficulty. Despite increased specification there remains the potential that the new works may be the subject of further damage in the future.”

The council said it would be working with the Garda to try to reduce the risk of further vandalism to the cameras.

“In conjunction with the gardaí, South Dublin County Council will make every effort to maintain the CCTV and lighting in operable condition to ensure that the Greenway remains a safe route to serve the public.”

While the cost of reinstating the cameras is not yet known, the replacement of one pole supporting CCTV cameras that was vandalised on the canal in 2016, cost more than €5,000.

The cost of replacing the cameras on the pole was estimated at €6,000 plus Vat with a further €6,000 for a “hardware upgrade”. It was decided not to go ahead with the works due to the cost.