Is it unusual to see a bumblebee at this time of year? Readers’ nature queries 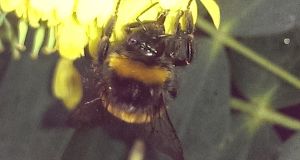 A bumble bee queen drawn out of hibernation unusually early by mild weather.

This fellow recently appeared on the river Dodder. He warbles and fishes. I walk by the Dodder every day and have seen yellow wagtails, kingfishers, herons, otters and foxes – it’s fabulous. – Petrina Blair, Rathfarnham, Dublin 14

It’s a dipper. They dive into streams and rivers to pick insects from the bottom.

We’ve had a surprise recent visitor: a black redstart, It looks like she might stay for a while enjoying mealworms. The local robin hates her and chases her off. – Stephen Butler, Palmerstown, Dublin 20

I found this creature in the surf at Rosses Point, Sligo. It was a metre long and weighed about 15-20kg. I dragged it up on the shore to get a photo. What kind of shark is it? – Alice Lyons, Sligo.

It was a young blue shark. They can grow up to 4 metres.

Recently I’ve been visited by a number of birds which to me look like rock doves. In the past there was a colony along the Howth cliffs, but I see from the literature that they are now confined to the west coast from Donegal to Kerry. Occasionally one will join the feral pigeons, but they mostly feed on their own. – Frank Smyth, Sutton, Dublin 13

Yes, the literature says that pure bred rock doves are confined to the west coast, but that feral pigeons can sometimes look almost identical to rock doves.

On December 10th I saw a pair of magpies building a nest in a park in Phibsborough. Is that a bit early for magpies? – Derek O’Reilly, Broadstone, Dublin 7

The unusually mild winter is likely evidence of global warming. A pair of courting robins flew around the head of a visitor (suitably distanced) at my door in mid-December.

I saw this bumblebee on December 13th. Is it unusual to see them at that time of year? – Rachel Heffernan, Dublin

That was a bumblebee queen drawn out of hibernation unusually early by mild weather.