Dublin Bus routes redesign is for the ‘city of the future’ 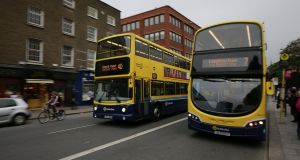 The architect of a proposed new Dublin Bus route network has said the design is for a city of the future not for the past.

On Monday the National Transport Authority (NTA) published plans for a complete redesign of the Dublin Bus network, and the introduction of a once-off fare for all the city’s public transport services.

Jarrett Walker, the designer, said the aim was to “make it possible for more Dubliners to get to more places, more quickly”.

He said the design was to make using the bus the “logical choice for a greater share of the population,” he told RTE’s Today with Miriam show on Tuesday.

“To improve all those things we had to have a system that wasn’t designed based on history, but was designed based on the future. We really did have to take a blank slate and make sure we were designing a network that makes sense for Dublin now, rather than things that are relics of the past.”

The plan will see decades-old routes replaced by new itineraries, which the NTA said will result in more frequent, reliable and integrated services.

However, a number of journeys that are currently direct will require changing buses, and some passengers living in outer suburbs will have to take more than one bus to reach the city centre.

Last month the NTA published plans to upgrade 16 core bus corridors, with dedicated lanes and segregated cycling facilities. However, the redesign of the network will affect every bus route in the city.

Under the proposed new system, Mr Walker said bus routes in Dublin routes will be lettered or numbered in a way that makes the whole structure of the system really clear.

“One of the big ideas of the plan is there will be extremely frequent bus services flowing through the centre of the city in simple paths, called spines and they’re lettered A through G and then further out the spines making branches called G1, it’s designed to be very simple and very easy to learn.

He said the existing bus system was effective in getting people into and out of the city centre but less effective there are many other things it doesn’t do well.

“It’s very difficult to travel on the same side of the city without going into the city centre” and added that the service was infrequent in many cases and “immensely complicated”.

The report took 18 months to compile and involved a survey on people’s expectations.

“We spent a week locked in a room with the National Transport Authority, Dublin Bus and the local authority. We designed the network together with people who know the city. That was the process.”

Incorporating Dublin city centre’s medieval streets into the plan was the trickiest part of the project, he said. But it had been a joy getting to know the city and “figuring it out.”