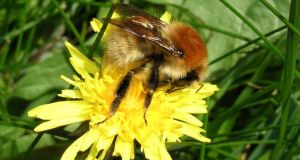 The Larger Carder Bee, one of many Irish species under threat. Photograph: John Breen

Irish scientists have been asked to contribute to an international investigation of the global decline of bee populations by identifying the particular causes of stress which are wiping out many species.

Pollination experts from Trinity College Dublin will be playing a central role in the €9 million project, funded under the EU’s Horizon 2020 programme, by working with farmers and beekeepers across Europe “to establish a baseline of what’s stressing bees in agricultural ecosystems”.

Bees play a critical role in the foodchain, but are vulnerable to loss of flowers because they feed on nectar and pollen throughout their lives. Decline in populations in Ireland and across the globe has been accelerating in recent years, especially among native varieties. Of the 100 species of bees in Ireland a third are threatened with extinction.

Pollinators face multiple threats including agrochemicals, pathogens, habitat loss and climate change, according to the TCD professor of botany, Jane Stout, who is leading the Irish input.

The project, named Pan-European Assessment, Monitoring and Mitigation of Stressors on the Health of Bees (PoshBee), will run for five years. It aims to understand the impacts of multiple pressures on a range of bee species and develop new tools to help reduce risks and negative impacts, Ms Stout said.

It is being co-ordinated by former TCD zoologist Prof Mark Brown, now at Royal Holloway University of London, and will bring together 42 partners from across Europe; seven beekeeping associations; eight farming organisations; four companies; and 23 academic and government research organisations.

Prof Stout will direct researchers across eight European countries in conducting fieldwork to assess real levels of exposure that bees have to chemical, nutritional and pathogenic stressors. In Ireland, this work will be conducted in collaboration with Teagasc and the Federation of Irish Beekeepers Associations.

“It’s thought that a combination of pressures, including agrochemicals, disease and loss of floral resources, which provide bees with their nutrition, is contributing to bee decline,” she said. “We are aiming to quantify this in the field . . . to try to establish exposure hazards, and ultimately develop tools, screening protocols, and practice- and policy-relevant outputs to local, national, European, and global stakeholders.”