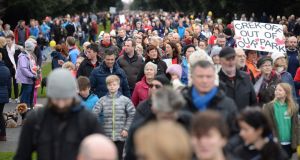 A section of the crowd who turned up in January to protest against the application by Crekav Trading GP Ltd to build 536 residential units on playing fields at St Anne’s Park. Photograph: Dara Mac Dónaill

A residents group campaigning against the development of more than 500 homes on playing pitches beside St Anne’s Park in north Dublin has said it is delighted that its legal challenge has been accepted.

The action taken by Clonres CLG, which represents residents from the Clontarf area, and two environmentalists, was the first challenge to a decision made under the State’s new “fast-track” planning system for large-scale housing developments.

An Bord Pleanála yesterday told the High Court it made an error in April when it granted permission for the development by Crekav Trading, part of developer Marlet, to build 104 houses and 432 apartments on former playing fields east of St Paul’s College, beside St Anne’s Park in Raheny.

Mr Justice David Barniville was told by Fintan Valentine BL, for the board, that it would agree to an order quashing the permission.

The application was made under the new Strategic Housing Development “fast-track” planning system. This allows applications for schemes of more than 100 homes to be made directly to An Bord Pleanála, bypassing the local authority decision phase.

The new system,designed to remove planning “blockages” to the construction of homes to address the housing crises, came into effect one year ago, but only a small number of applications have yet been processed by the board.

The Crekav decision was the first to be subject to a judicial review, the only form of appeal open to third parties under the new system.

The judge adjourned to matter to next month to allow the parties consider what the board had said. The board is likely to state at this point whether it proposes to reassess the application, or to issue a refusal of permission.

Deirdre Nichol, of Clonres said the residents were “delighted” by the board’s decision to conceded.

“We feel vindicated by the fact that we took the judicial review, which as a residents association we did not do lightly,” she said.

“Our hope would be that these lands would be protected going forward and they would revest back to their use up to now as playing fields, and for the use of the geese and other endangered species.”

The board, and representatives of Crekav, said they could not comment on ongoing legal proceedings.

Brendan Slattery, a planning expert at law firm McCann FitzGerald, said while the first strategic housing decision to be challenged had “fallen without a fight” it did not mean the planning process was flawed .

“The reason An Bord Pleanála has conceded is very narrow and has nothing to do with the new accelerated planning process. The strategic housing process remains the most effective vehicle for securing a timely planning decision,” he said.

It was positive he said, that a new faster court system had brought the error to light early.

“The silver lining is that the expedited court procedures made sure this issue surfaced quickly. The permission was granted in April, the challenges were commenced in May and the board has conceded an error within four weeks. That kind of early action is uncommon.”