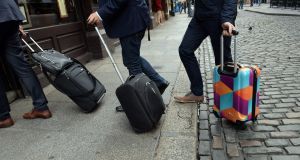 Visitors to the Temple Bar area of Dublin city. Airbnb has emailed property owners who advertise on its platform inviting them to attend a reception in the Mansion House in February. Photograph: Cyril Byrne

The use of the Mansion House to host a drinks reception for owners of Dublin properties listed on holiday lettings website Airbnb has been defended by the Lord Mayor of Dublin, Nial Ring.

Legislation to restrict the use of properties for short-term lets, such as Airbnb, in areas of high housing demand is expected to be introduced this year in an attempt to increase supply of homes in the rental market.

Minister for Housing Eoghan Murphy last November said short-term lets would be restricted to the owner’s primary residence and capped at three months a year, while owners of second homes or investment properties would be banned from short-term letting unless they obtain planning permission.

The measures were designed to help alleviate the housing crisis, Mr Murphy said.

Airbnb has emailed property owners who advertise on its platform inviting them to attend a reception in the Mansion House in February.

“We are delighted to invite our host community to attend a special evening reception in the Oak Room of the Mansion House,” the email states.

“Lord Mayor of Dublin Nial Ring will be in attendance to welcome hosts and you will hear updates on the powerful contribution hosts in Dublin are making to the local economy.”

It states that “drinks and canapes will be served from 6.30pm. It will be a wonderful occasion to meet fellow hosts and share your experience of hosting.”

Mr Ring, who has been asked to address the gathering, said it was his understanding those invited to the reception would be individual homeowners and not landlords running short-term lets instead of long-term rental properties.

“As far I know theses are people in in their own houses who are using Airbnb to help pay their mortgages. I would have no truck with people who have second and third houses on Airbnb.”

Mr Ring said he has spoken previously to Airbnb hosts who were concerned about the new legislation and the restrictions it would put on their ability to rent out their homes.

“I have met people, some of them elderly, who are concerned about the up coming legislation and they have presented the case to me that this adds to the tourist offering in the city and helps them to pay their mortgages.”

Those attending would be part of the “Dublin home sharing initiative”, he said. “It won’t be an event for multiproperty owners abusing Airbnb.”

While Airbnb issued the invitations to the Mansion House a spokeswoman for the company said the event was being run by the Dublin Homesharing Club, which is described as a group that works to provide “overall better guest experiences as well as maximising the financial opportunities for homesharers”.

The event was not public and only invited guests who had registered for the event could attend, the spokeswoman said.