Alien invasion: strange creatures hitching a lift to a shore near you 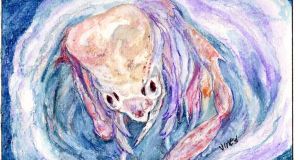 With the river to wade in at the bottom of the boreen and a long, soft trudge around the dunes, the edge of the sea gets more distant every year. And on the brink of 86, a full combing of the tideline, a kilometre or so each way, is now beyond my somewhat shaky stride.

So I have missed the chance of a close encounter with this year’s strangest arrival, star of last week’s Eye on Nature. Phronima sedentaria – pusher of prams or alien monster of the deep, depending on the discussion – began drifting ashore in Co Kerry last November in little crystal barrels. They appeared in hundreds more on strands up the west and reached even to the beaches of north Antrim a couple of weeks ago.

From these peered out a tiny shrimp-like creature, phronima, a free-swimming amphipod (like a sand-hopper), hitching a parasitic lift in a salp. This is a tubular, gelatinous sea squirt. Phronima invades one of these, hollowing it out into a barrel-shaped home by sucking away at its jelly-like interior. Here the female lays eggs and feeds the cells to her young in a salp nursery. “Pram shrimp” is its common name among naturalists, from observations of it paddling away at the rear to push the barrel full of offspring through the water.

Phronima lives at great depths in all the non-polar oceans, migrating vertically to shallower waters at night to feed safely on zooplankton. In historic samplings in Irish offshore waters, most specimens were taken at 1,000m or more. Research also suggests that late autumn is the hatching season and that adult females liberate their young at the surface before sinking down again.

A strong, deep current from off the Bay of Biscay runs up the west of Ireland and round the north of Scotland. And while the abundance of Phronima may have its own mysterious causes, this past autumn’s relatively calm seas have delivered it ashore with an exceptionally gentle touch.

The last mass strandings on Irish beaches, in November and December 2011, were reviewed in the Irish Naturalists’ Journal by Declan Quigley, Kevin Flannery and colleagues at the Dingle Oceanworld aquarium. As they reported, some of the salp “barrels” contained both adult and juvenile animals. And last autumn, Flannery discovered on the beach at Ventry Bay that more than a dozen live specimens could be salvaged for display in the aquarium.

And the “alien monsters”? This comes from the media-friendly story that Phronima’s parasitic habits, together with its menacing presence in close-up, were the inspiration for the creature that burst out of John Hurt’s chest in the movie Alien.

While transparent salps of the deep ocean remain rare at Ireland’s tidelines, proper jellyfish can produce spectacular strandings sometimes numbering millions. That was certainly the case in 1992. when the crests of Velella velella were piled in continuous drifts on some beaches of the west.

Velella (more commonly the “by-the-wind sailor”) belongs in a class with Physalia physalis, the Portuguese man-o-war, but at a very different scale. Instead of the big gas balloon that drives the latter before the wind, Velella tops its dark-blue jelly colony with a low, stiff triangle of a sail, quite rainbow-bright when fresh. This can be all that remains to puzzle the beachcomber, and Eye on Nature is often called upon for identification.

The sail is mounted diagonally on the float, varying in compass angle, so that, in the same wind, some Velella will sail leftwards and others to the right. This distributes the species more widely across the sea.

Even without a sail, large swarms of jellyfish forming naturally at sea can be driven inshore by winds and currents. One of the most troublesome has been Pelagia noctiluca, which , despite its common name of “mauve stinger”, has smothered western Irish beaches in something very like marmalade.

Pelagia thrive in warm, open waters and are a regular pest to bathers in the Mediterranean. Major fleets of them have been carried northwards to toxic invasions of salmon farms. In 2007 the jellyfish destroyed an entire stock of fish at a farm in Co Antrim, and in the summer and autumn of 2013, with warm sea temperatures, large drifts brought more heavy losses to fish farms on the west coast.

Compared with such traumas, the brilliant scatterings of Phronima sedentaria can be reckoned a rare reward for a bracing winter trudge into the wind with salty lips and the gentle crash of surf at one’s side. I do miss it rather, even for the many, many times when there was nothing very weird or wonderful to find.