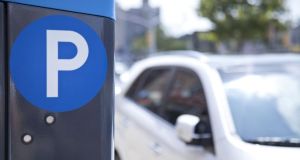 Dublin City Council plans to increase the number of areas covered by the three most expensive street parking zones, a move which will affect parking in city and suburban streets Photograph: iStock

Street parking charges in parts of Dublin are set to rise by up to 70 per cent, with areas around hospitals worst affected, under a new Dublin City Council parking zone expansion plan.

The council plans to increase the number of areas covered by the three most expensive street parking zones, a move which will affect parking in city and suburban streets.

Dublin city councillors last November agreed to a 10 per cent rise in on-street parking charges in high-demand areas of the city, the first parking charge increases since 2008.

However, the council’s traffic department is now proposing to extend each of the high demand zones to cover more streets. The expansion will mean some motorists currently paying €1.60 an hour for parking will see the charge rise to €2.70, a hike of just under 69 per cent, with others facing an increase of one third from €2.40 to €3.20 an hour.

The highest charge yellow zone will be extended on the north side only, with those parking in Phibsborough, particularly close to the Mater Hospital, facing the €3.20 hourly charge.

The red zone is also increasing its reach on the northside, to encompass the area surrounding new DIT college campus at Grangegorman. This zone will also be extended in the city’s docklands.

The red zone currently stops before the new Central Bank building, but would now run all the way to the 3 Arena. Similarly, south of the river it will include the rapidly developing Grand Canal Dock area to the end of Sir John Rogerson’s Quay.

The 70 per cent jump to the €2.70 red zone would also hit residential roads in Ranelagh and Rathmines, previously included in the medium demand €1.60 zone.

The red zone will also be extended to include Harold’s Cross for the first time.

Areas previously considered low demand, where parking is currently just €1 an hour are being brought into the medium demand zone.

Those parking in Kilmainham and around St James’s Hospital and the Coombe Hospital will now face the €1.60 hourly charge.

The council intends to begin public consultation on the changes next month.