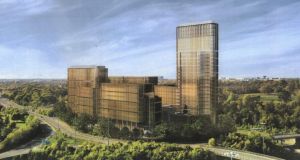 Plans for the State’s tallest building, a 28-storey hotel close to Castleknock in Dublin have been rejected by Fingal County Council because it would be ‘seriously injurious’ to the skyline.

Plans for the State’s tallest building, a 28-storey hotel close to Castleknock in Dublin, have been rejected by Fingal County Council because it would be “seriously injurious” to the skyline.

Propotron Ltd had sought permission for the 459-bedroom hotel and office development at the junction of the M50 and N3, between Castleknock and Blanchardstown.

At more than 143m tall, the skyscraper would have been considerably bigger than the State’s current tallest building Capital Dock at Sir John Rogerson’s Quay in the east end of the city which with 22 storeys is 79m tall.

Even though it would have had fewer floors, it would also have been taller than the recently approved 34-storey hotel planned for Custom House Quay in Cork city.

Planners for the developer had argued the Castleknock development, branded Junction 6, would be a “positive contribution” to the area, adding that the site was suited to “more intensive development”.

Though the developers said the visual impact of the new scheme would be “negligible”, the council ruled that it would be an “intensive over-development” because of its “bulk, mass, height, scale, design and physical dominance”.

It would be “seriously injurious to the visual amenity of the area, and to the amenities of property in the vicinity and would be seriously out of character with the pattern of development in the area”, the council said.

It would even be contrary to ministerial guidelines on building heights, which in 2018 removed the caps on tall buildings.

Local Labour councillor John Walsh welcomed the council’s “emphatic rejection” of what would have been a “visual monstrosity” for the area.

“This application involved massive over-development and would be a visual monstrosity,” he said. “This is the kind of development that you might expect in Dubai or New York, not in Dublin 15.”

This development would have dominated the skyline and overlooked homes directly across the N3 in Blanchardstown village, the Old Navan Road and Castleknock, Mr Walsh said.

“Allowing such unrestrained high-rise development would turn west Dublin into the Wild West for sustainable planning,” he said, noting that it would add significantly to local traffic numbers.

In a submission to the council the National Transport Authority said it would have “serious concerns” about the impact the skyscraper would have, if permitted, on already congested roads.