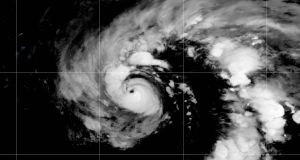 A photo of Hurricane Epsilon. Photograph: National Oceanic and Atmospheric Administration via The New York Times

It never rains but it pours. Along with Level 5 restrictions and the clocks going back, a wet and windy weekend in Ireland over the next few days will be followed by the remnants of Hurricane Epsilon.

The storm, which passed near to the Bahamas on Thursday, will make its way across the Atlantic, generating strong winds and rain.

Met Éireann forecaster Paul Downes said Epsilon is currently off the coast of Nova Scotia. As it crosses the Atlantic, it will turn into an ex-tropical system.

He cautioned that it was too soon to issue weather warnings in relation to it as the track of such weather systems can be hard to follow.

He said that there will certainly be gale-force winds along the west coast, but the extent of the rain will be hard to forecast until closer to the event.

Status yellow rainfall warnings are in place for Galway and Mayo from Friday night into Saturday morning, with accumulations of between 20 and 40mm expected there, with higher accumulations in mountainous areas.

This will bring a risk of localised flooding and heightened risk of flash flooding.

There is also a status yellow wind warning in place for Galway, Mayo, Donegal, Clare and Kerry for roughly the same time period, between 10pm on Friday and 7am on Saturday, with gusts of between 90 and 110km/h expected in exposed places in these counties.

A separate status yellow wind warning is in place for Wexford, Cork and Waterford from 11pm on Friday to 10am on Saturday.

“It’s going to be an active week,” Mr Downes said. “A lot of the energy from that system [Hurricane Epsilon] is ramping the weather up over the next few days and the jet stream is getting stronger.”

If that wasn’t bad enough, the clocks go back by an hour on Sunday morning at 2am.