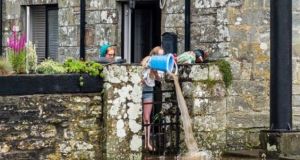 The Taoiseach has pledged to provide emergency funding to repair more than 15 roads in west Cork that were badly damaged in two separate flooding incidents last week, a Fianna Fáil TD has said.

Cork South-West deputy Chrisopher O’Sullivan said he had spoken to Micheál Martin after heavy rain on Saturday further damaged roads around Rosscarbery, which were also flooded on Thursday. He said he had explained the damage to the road network and the devastation the floods had caused to businesses and homeowners in his constituency to Mr Martin.

“The Taoiseach confirmed that the Government will respond with emergency funding as soon as we know the full extent of the damage, so it’s important that Cork County Council finalises a detailed report as quickly as possible so it can apply for the funding,” he said.

Mr O’Sullivan said, based on phone calls and emails received since Saturday, a minimum of 15 roads, mainly around Rosscarbery, have been badly damaged.

“Some roads have washed away; out at Sand’s Cove near Ardfield a cliff has formed overnight after the beach was washed away and the road there is gone too, while there was also serious damage on the Rathbarry road and the Rosscarbery to Glandore road, which was impassable,” the TD said.

He said that the damage caused when a stream burst its banks on a road to Rathbarry was particularly regrettable as it was almost a carbon copy of what happened during a 2012 flood and could have been avoided.

“We should have learned our lesson there after 2012 with proper drainage and clearance of streams. There is certainly an element of there not being enough outdoor [council] staff to keep the drains and the gullies clear,” he said.

It is understood that several houses in the Newtown area of Rosscarbery were flooded on Thursday and Saturday.

Cork County Council confirmed on Sunday that the main artery into west Cork, the N71, had fully reopened having become impassable near Rosscarbery on Saturday after heavy overnight rain led to streams overflowing and run-off on to the road near Newtown.

Denis O’Donovan, a farmer who lives near the badly damaged Rosscarbery to Glandore road, told Cork’s 96FM that repair work needs to be carried out as a matter of urgency.

“This repair work needs to be done asap, but again the worry we have as locals is that it will be another patch-up job done to get the road opened quickly. Our fear is we will be forgotten about again when this all dies down and then with the next flood we are back to square one.”