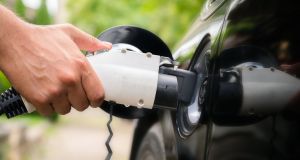 “We are setting a target of 10 per cent of all vehicles in the transport fleet to be powered by electricity by 2020, a figure of approximately 250,000 electric cars on Irish roads over the next 12 years.”

So said Eamon Ryan in 2008, minister for energy at the time, in a Dáil debate during which Simon Coveney attacked the targets for not being ambitious enough. He was member of an Oireachtas committee calling for a 15 per cent target by 2020, with the entire Irish vehicle fleet electric by 2030.

Forecasting is a mug’s game, but politicians can’t resist setting targets for the future. As of December 2019 there were 9,120 electric vehicles registered on our roads, making up 0.33 per cent of the national fleet of 2.8 million vehicles. By the end of last week a further 2,701 new electric cars were registered during 2020, accounting for 3.6 per cent of total new car sales this year. During the same period, a further 107 electric commercial vehicles have been added to the transport fleet.

Electric cars may represent the future, but so far the public has been reticent to put their money behind the move. For a revolution billed as being on a par with the replacement of the horse over a century ago, a 0.4 per cent share of all national fleet hardly indicates a surge in consumer interest.

Yet these figures belie the evident interest on showroom floors and on social media. Buyers are clearly intrigued by the latest offerings. Hybrid sales, where the vehicles run partly on battery power and partly on a petrol engine, are growing rapidly, now accounting for 15 per cent of the new car market.

However, when it comes to fully electric cars, three hurdles lie in the way of mass adoption: range anxiety, the recharging network, and price.

Range anxiety – the fear of the battery running flat and leaving you stranded – is perfectly understandable. However, engineering improvements have increased the range of electric cars, and new models are arriving every month boasting better range. BMW, for example, is set to launch two new models next year promising 600km on a single full charge. That’s similar to many petrol cars these days. Range is already becoming a price option for some car brands, with some models offering the option of different sized batteries at different price points, depending on a customer’s needs.

Closely linked to the range anxiety issue are concerns about the recharging network. Again, this is a work in progress and for commercial property companies it makes sense to install rechargers on sites. Currently, forecourt retailers claim to make much of their money from the ancillary purchases during a customer’s brief refuelling stop. All sorts of service providers should be able to do the same with motorists waiting for their cars to charge. Also, car companies are getting involved in developing recharging networks, through group projects like the Ionity fast-charging stations. At present, however, access to public charging stations remains the biggest practical hurdle to electric car ownership, particularly outside the major cities and towns.

The final hurdle is price. While there are several electric cars on the market for €30,000 or so, many of the larger models with better range are closer to €50,000 or more. And electric cars promising the greatest range are still prohibitively costly for most buyers, beyond the reach of most Irish motorists who traditionally buy used, not new, cars.

To encourage motorists to change, we’ve seen the carrot in the form of grants. Now we are starting to see the stick, in the form of proposed bans on the sale of new non-electric cars, restrictions in built-up areas and the potential for punitive tax measures on petrol and diesel.

If the carrot is aimed to lure consumers, the stick is targeted at the car makers. Environmentalists argue the rollout of new electric models could be done far quicker, and at more competitive prices. Yet, there is widespread belief that car companies are losing money on their new electric models at present, given the massive investments required in development. Sales of fossil-fuelled models are financing the electric revolution.

On top of these concerns is the fear of opting for the wrong car. No one wants to be stuck with the motoring equivalent of a Motorola mobile when the four-wheeled iPhone arrives. Cars are the second-largest investment after the family home, and the biggest depreciating asset. Throw in the timeline for tech redundancy and it’s perfectly understandable why consumers are sitting tight for now.

One option to ease their concerns is to offer a buyback scheme targeted at the battery packs of these electric models. While they may be outdated for motoring, or their range too depleted, they can work as storage units for renewable energy supplies like wind or solar. The potential to offer a financial return at the end of ownership might just be the sort of reassurance buyers need to make the leap to electric.

Today’s new cars are the future used car stock for the Republic’s two million private motorists. There needs to be a sizeable increase in electric car sales now if we want to see a lot more electric cars on our roads within the next five years.

See The Irish Times rating for every electric car on the market this year and next at iti.ms/3agZIyv