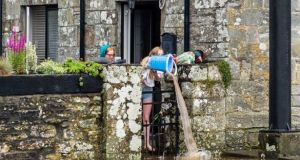 After a night of torrential rain the river Roury broke its banks and also caused flooding in Rosscarbery earlier this week. Photograph: Andy Gibson

West Cork has been hit again for a second time this week with flooding and damaged roads after a night of torrential rain. Motorists are being asked to avoid affected areas.

Overflowing streams led to the closure of the main N71 artery road at a number of locations as well as damage to some back roads on Saturday.

Cork County Council said its roads department and fire service staff worked through Friday night to try and stop flooding of properties around Rosscarbery and Coonanagh.

Staff put out sandbags to try and protect a number of properties in Rosscarbery.

The ground was still saturated from heavy rain on Thursday morning when over an inch fell in parts of Cork and Saturday morning’s heavy rain led to further flooding.

Met Éireann issued thunderstorm and heavy rain warnings on Saturday for several counties. A status yellow rainfall warning is in place for Wexford, Cork and Waterford until 6am on Sunday while a status yellow thunder warning is in place for Munster, and counties Carlow, Kilkenny, Laois, Wexford, Offaly, Galway, Mayo and Roscommon until 9pm on Saturday

These could bring localised heavy downpours and present a risk of flooding.

Cork County Council said they were not able to protect all the affected properties or the N71 from further flooding.

“Unfortunately, the flooding has impacted some properties in the area. The N71 has now reopened at Connonagh, but will remain closed at Rosscarbery until later today, traffic diversions are in place,” it said.

“The heavy rain has caused additional damage to the Rosscarbery to Glandore road, R597 at Roury Bridge and roads around Clonakilty, Dunmanway, Bantry and Sheep’s Head have also been affected.”

Local Cork South West TD Christopher O’Sullivan (FF) said a stream bursting its banks and eroding the road surface on the back road to Rathbarry had caused the damage.

He said the road had been badly damaged by flooding in 2012 but no remedial work had been carried out on the stream and it again caused similar damage in the most recent floods.

The council has indicated it would be applying for emergency funding to repair the damage caused to roads in west Cork this week and locals have urged the council to move quickly.

Local farmer Denis O’Donovan, who lives near the badly damaged Rosscarbery to Glandore Road, told Cork’s 96FM that repair work needed to be carried out to the road as a matter of urgency.

“This repair work needs to be done now, it needs to be ASAP but again the worry we have as locals, is that it will be another patch up job done to get the road opened quickly,” Mr O’Donovan said.

Senator Tim Lombard, who ran for Fine Gael in Cork South West in this year’s general election, told the same radio station it was important the authorities did all they could to help those flooded in Rosscarbery.

“Just 48 hours after Rosscarbery was flooded, another major flood has happened – it must be very disheartening for the local community who have done so much clean up work over the last few days,” he said.

“I think it is appropriate now for local government, for Cork County Council to work with the OPW to find solutions as a matter of urgency to prevent any repeat of these flooding events.”