Michael Viney: The wayside ashes of the west stand as defiantly healthy emblems of their kind 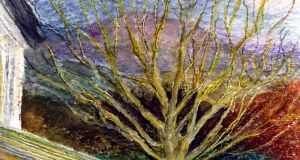 A tree planted closer to the house grew into a strong-muscled, shapely candelabra, beautiful in every season. Illustration: Michael Viney

I could have looked up when kneeling to plant the little ash tree some 30-odd years ago. Then I might have considered the powerline high above me, strung from the transformer beyond the hedge to the pole beside the house.

But perhaps I just couldn’t imagine the ambition locked up in the sapling I was firming in.

This summer, as the tree’s topmost twigs reached up to embrace the wire, I began to dread the approach of early autumn storms. It was time to consult the ESB.

They’re jolly decent in these matters. If the offending tree is beyond the immediate domestic pole, they will, in good time, despatch a remedial team with a baby chainsaw on a very long pole.

This was, sadly, our second ash to come into conflict with technology. A tree planted closer to the house grew into a strong-muscled, shapely candelabra, beautiful in every season. But it came to obstruct the wireless beams by which we shared our broadband with neighbours. Its pollarding prompted final felling, to our mutual regret.

Meanwhile, the wayside ashes of the west stand as defiantly healthy emblems of their kind. Further east, and across the midlands, hedgerow ashes and forest plantations have been scarred by “the single most devastating forest pathogen ever to hit the postglacial woodlands of Ireland”. That was Teagasc’s blunt summation of Chalara ash dieback, wrought by the Asian fungus Hymenoscyphus fraxineus.

Since its first discovery in Co Leitrim in 2012, its airborne spores have had worst impact on young ash plantations, their leaves wilting and blackening into death. It is now established in all counties in Ireland, but as yet spares large reaches of the western seaboard, saved by Atlantic winds.

In 2013, the Department of Agriculture, Food and the Marine devised a “reconstitution scheme” to help in clearing affected plantations and planting them with alternative species. By 2018, this had cost some €5.8 million, for more than 1,000 hectares, but it stopped when scientists advised that eradication of ash dieback was no longer feasible.

After widespread damage throughout Europe, the research priority is finding the small minority of ash trees that are tolerant of the disease, passing on their tolerance genetically.

Actual resistance to the fungus has not been found in any common ash population. And even naturally tolerant trees, left to themselves, could take many decades or even centuries to evolve any widespread, rural equilibrium.

Thus, say geneticists working with Ireland’s Council for Forest Research and Development (Coford), the focus is on breeding from tolerant trees and spreading their progeny to forests and hedgerows over a much shorter time.

Two bark chemicals most strongly associated with tolerance belong to the family of coumarins, their sweet scent familiar from freshly mown hay

Even to identify tolerant trees needs an environment where the pressure of disease is high and their stubborn health quite evident. This is still unusual in Ireland, so most of the breeding programmes are in Europe.

However, Teagasc’s forestry researchers have had access to ash trees of widely varied Irish provenance already growing in six countries and planted for an earlier, unrelated trial. They include 1,000 trees in Lithuania and 14,000 in the UK. Using such material from Belgium ,they have identified chemicals in the ash that distinguish tolerant trees from those sensitive to dieback.

Two bark chemicals most strongly associated with tolerance belong to the family of coumarins, their sweet scent familiar from freshly mown hay. Such molecular signals are now helping to seek out tolerant trees in Irish stands.

Dr Gerry Douglas, just retired from Teagasc’s breeding ash research, puts such trees at 1 to 2 per cent. “The best news,” he says, “is that this ‘natural’ resistance in ash is heritable, and also highly stable in trees that are propagated vegetatively.”

This is different, as he points out, from the restorative breeding of disease-resistant elms, which involves introduction of new genes from Asian elm species.

The ash-breeding programme will need large nurseries to propagate trees by grafting and for production of cuttings for rooting. A second stage begins with producing small amounts of seed from grafted trees grown in high polytunnels.

All this will take years, as Coford sets it out, perhaps as long as 20. But Gerry Douglas is confident that the programme will produce resistant ash seed “for sprinkling along the hedgerows”.