‘Extensive Irish commitment to data centres’ could cause cost to consumer, study finds 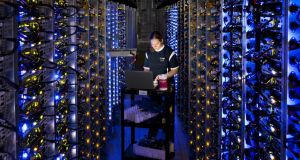 The notion that Ireland will achieve a 7 per cent reduction in Irish carbon emissions every year up to 2030 is “wildly unlikely”, according to the economist Colm McCarthy.

As the country pursues various policies to try to control emissions, however, “various technologies will be developed at episodic pace” that will assist decarbonisation of the economy, he predicted.

Commenting following publication of his report Climate Action and the Taxation of Motoring in Ireland, he added: “A 7 per cent annual cut [agreed in the programme for government] is wildly unlikely and might not be optimal for the economy.”

In the analysis, he also evaluates current emissions patterns; future targets and whether they will be achieved in the period up to 2030 – and carbon tax impacts.

“And there will not be a whole heap of EVs [electric vehicles] on Irish roads for a least a few years,” he added. The capacity to meet a one million EV target was simply not there, and there were not enough plants yet to generate batteries for EVs.

He stressed, however, there were no technology constraints and the electric car market will become competitive as soon as EVs are being made “by the million, at a €20,000 price point”.

His report was commissioned by the Irish Car Carbon Reduction Alliance, made up by a majority of Irish motor dealers, who accept the need for zero-emission vehicles but are seeking a different approach to a government ban on petrol and diesel cars by 2030, that allows for purchase of carbon-efficient fossil-fuelled cars up to 2040, as agreed by the EU.

On the programme for government, Mr McCarthy said it had a number of contradictions, notably the “mad idea” building of very expensive high-speed railways while at the same time decarbonising road transport over 15 years.

In analysing the 2019 Climate Action Plan (CAP) in the broader context in which policy on the taxation of transport must be enshrined, he said it was clear the EU Emissions Trading Scheme (ETS), which covers how heavy industry and power generators account for their emissions, was “a disaster, especially for Ireland”.

Instead, Europe should have gone the carbon tax route “and increased it every year for the next 50 years”. He said economists like himself have been whingeing about this for years. In the meantime, a litre of jet kerosene was 60 cents at Dublin Airport and untaxed, a litre of diesel was €1.30 at a nearby filling station – while marine diesel was untaxed.

Irish emissions are mainly outside the ETS, which relates to emissions from power generation and heavy industry, to a greater degree than in other EU countries, McCarthy notes.

This imposes a differential adjustment obligation, since non-ETS targets must be attained entirely through national policy measures. Ireland’s targets are affected greatly by the measurement system, which counts emissions from agriculture on a production basis.

“Most other emissions, for example fuel combustion in the road vehicle fleet, are counted on a consumption basis. This measurement issue is important since Ireland is a substantial net exporter of agricultural products,” he notes.

From 2021 Ireland’s emissions from the non-ETS sector, a higher portion of the total than elsewhere in the EU, are required to decline substantially to 2030. This is especially problematic because an expanding agriculture is responsible for so much emissions, he finds. “Agriculture involves a potentially perverse attribution of responsibility for emission reduction and conflicts with both efficiency and fairness.”

Any policy to restrict herd numbers in countries such as Ireland where output has risen significantly amounts to a reversal of milk quota abolition, he suggests “leading to a re-allocation back to the less efficient producers, for example a decline in Ireland encouraging increased output in Spain. ”

Consumer taxes on products would reinforce the trend towards an efficient geographical distribution of European production, an objective of EU Common Agricultural Policy reforms, he notes.

A steady increase on non-ETS emissions is projected, and would necessitate the purchase of costly carbon credits. ETS sector emissions are also expected to rise, he adds, despite ambitious plans for renewable energy in power generation.

While Ireland will miss emission targets up to 2020, McCarthy concludes: “Since the 2020 excess will be reduced by the Covid downturn, the amount of allowances to be purchased by Ireland to cover past overshoots will be less than had been feared...though neither the quantity nor the price of allowances already purchased to cover the gap is publicly available.”

Strong growth in the requirement for electricity network investment is driven largely by a 70 per cent target for the share of renewables in the generation mix and planned growth in facilitating data centres, McCarthy concludes.

The capacity of the data centres “already here exceeds substantially any demand arising in Ireland, so the country has chosen to become an exporter of data management and hence of electricity, the main input”.

It is not explained in the CAP why such a large proportion of Europe’s demand for data management has chosen Ireland, he says. “In the ordinary course of events it would be expected that northern European countries would enjoy a large share of data centre provision, since temperature control is more readily facilitated.

“But the decisions to locate in Ireland on such an extraordinary scale (29 per cent of power demand is expected by Eirgrid to come from data centres within a few years) may also have their motivation in the failure to require full costs, including infrastructure costs, from the data centre companies.”

Because of the large commitment to data centres, any curbs on the construction of wind farms and solar generation facilities could diminish the availability of low-carbon power to the non-ETS sector, and lead to non-compliance penalties for Ireland, and ultimately cost consumers.

The current carbon charge in Ireland is €26 per tonne carbon. Climate campaigners have argued recent increases in the carbon charge have been too timid and there have been calls for a charge of €100 (and more) – since adopted in the programme for government.

McCarthy comes down in favour of a combination of electronic road charges and congestion charges in urban area to replace fossil fuel taxes that are set to decline. These should not involve deployment of physical barriers as in London, (which leads to inefficient queuing) but avail of the fact that modern cars are “connected” and have GPS.

“By accident, a whole lot of things have come together”, which are forcing the Government to consider proper congestion charges, he told The Irish Times.

The 11 tolls currently in existence are the closest approximation to a use-related charge in the Irish motor taxation system but generate only 5 per cent of revenues, “and not well designed”.

Three are in Dublin and the remaining eight scattered randomly around the motorway network, “reflecting the involvement of private finance in the construction of many of the links rather than the more coherent scheme in France”.

“The biggest money-spinner, the M50 in Dublin, is tolled at just a single point even though it is effectively the main street of the city. There has been political resistance to any revision to the M50 tolling scheme and it was clearly designed to recover construction cost rather than to manage congestion. The M50 was first designed as an outer bypass and has been overtaken by the urban sprawl to the west of Dublin,” he says.

The only tolled facility which has time-of-day charging is the Dublin Port Tunnel, where private cars pay €3, on a tidal-flow basis inbound or outbound, in the off-peak and €10 at weekday peaks. Trucks and buses go free on the East Link but must pay at all 10 of the other tolling points.

McCarthy’s analysis highlights the arbitrary “system” of tolling: “There are very few tolling points. Large parts of the country have none and all tolls can be avoided through the selection of un-tolled alternatives, depriving by-passed towns of relief from congestion by heavy trucks in several cases.”

Anomalies include: “...buses go free on the Dublin Port Tunnel but not on the M50. The tunnels in Dublin and Limerick are tolled but the Lee Tunnel in Cork is free”.