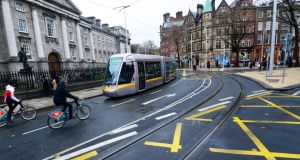 Concerns were raised over how the College Green plaza plans would affect bus links and traffic flow in the city Photograph: Cyril Byrne/The Irish Times

The College Green traffic free plaza, rejected by An Bord Pleanála last year, will be put in place this summer on a trial basis, Dublin City Council has said.

The council has confirmed it intends to lodge a fresh application for the permanent pedestrian and cycle plaza to the board by the middle of this year, but will close College Green to traffic between 7am and 7pm on Sundays in July and August to test out the popularity of the plaza and iron out any logistical difficulties.

The board last November rejected the €10 million plaza scheme due to concerns about the “significantly negative impacts” it would have on bus transport, and traffic in the city.

The plaza plan would have seen a ban on all traffic, including buses and taxis, from accessing Dame Street through College Green.

The council’s head of traffic, Dick Brady, on Wednesday said it was the view of the council management that the board’s reasons for refusal were “flawed”.

“The reasons for refusal centred around traffic, it didn’t centre around the quality of the design. The design as far as the board was concerned the design was acceptable,” he told councillors.

“The reasons were to do with traffic. It is the executive’s view those reasons were flawed. But we will go back and sharpen the pencil even further in relation to the traffic counts.”

The council has begun work with the National Transport Authority (NTA) in relation to the BusConnects plan to establish how many buses would still use the College Green area after the network redesign, and this information would form part of a revised application to the board.

The council had initially considered seeking a judicial review of the board’s decision, but instead decided to submit a fresh planning application.

However, an environmental campaigner is seeking leave to take a judicial review, on the basis of differing opinions in relation to effects the scheme would have on traffic.

John Conway, a member of the Louth Environmental Group, wants the board’s decision quashed and the application returned to it for reconsideration. The council is a notice party to his proceedings.

He claims the refusal was unlawful because the board’s traffic assessment failed to take account of significant changes proposed by the NTA to the Dublin Bus network under the BusConnects plan.

The case is due to be heard in the High Court on Thursday.

Meanwhile, the council will on Saturday “formally” pedestrianise Suffolk Street as part of a six week trial.

The street, close to College Green, has been closed to through traffic for several years since work began on laying the cross city Luas tracks, but has not had any formal pedestrianisation status and is used during the day as a drop off point for delivery vans and taxis.

The council had planned to use it as a pedestrian and cycle street as part of the College Green plans, but Mr Brady said, during a six week trial period, it will be used for pedestrians only, on the same basis as Grafton Street, with deliveries allowed before 11am.