Afforestation: a source of environmental damage and depopulation 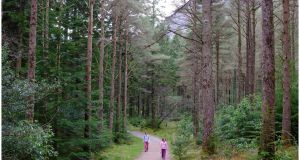 The Environmental Pillar has highlighted “a clear failure to increase our tree cover in a substantial and sustainable fashion”. Photograph: Bryan O’Brien

The campaign group says the Government must protect rural populations “from the socially isolating and mentally and physically harmful effects of being encircled by dark, lifeless plantations”.

The group insists it is not against forestry and understands its role in capturing carbon but it believes there has been a disproportionate amount of afforestation in Leitrim.

About half of the county’s agricultural land is planted in non-native, invasive species. “That’s 14,000 hectares (34,595 acres) of land covered by 34.5 million Sitka spruce trees,” says spokesman John Brennan. What is more, “it is the law that once land is planted, it can never be taken out of forestry”, he adds.

Leitrim is the county with the highest percentage of forest cover, at 18.9 per cent. However, the overall level of forest cover in Ireland is exceptionally low at 10.5 per cent compared to the EU average of 33.5 per cent.

On Tuesday, the Government announced an independent study of the economic, social and environmental impacts of forestry in Co Leitrim. This came a day before the Save Leitrim rally outside Leinster House, an indication of growing awareness of opposition to afforestation practices in the county .

The issue has been festering for decades, not just in Leitrim but also in counties such as Laois, Offaly and Wicklow. The campaign is endorsed by the Irish Wildlife Trust (IWT), whose campaign officer Pádraic Fogarty says “our native woodlands have all but vanished”.

Fogarty claims Irish animal, bird and fish species are being driven into extinction because their natural habitat is being replaced by unnatural conifer forests. Ireland is coming under pressure to reduce carbon emissions and one of the ways the Government plans to do this is with more conifer plantations, he adds.

“Monoculture” in the form of conifer plantations has also been identified as one of the principle sources of water pollution, he says. “Clear felling” results in “massive pollution run-off and leaves a devastated landscape in its wake”.

The species under threat are those that lived in uplands, woodlands and bogs that sustained birds such as curlews, golden eagles and hen harriers. The sediment from clear felling threatens the freshwater pearl mussel, while resulting acidification of rivers and lakes undermines salmon and trout populations, Fogarty says.

There is an urgent need to work out “how to fell and not cause enormous pollution”, he says,

Fogarty stresses there are solutions in the form of “forestry for wildlife”, and converting uncommercial plantations to native woodlands. He says diverse forestry is better at storing carbon than plantations.

“We are for the right trees, in the right places being managed in the right way so that everyone benefits; the environment, the wildlife, the communities, the farmers, the economy, the county and the future,” Brennan of Save Leitrim says.

NGO umbrella group the Environmental Pillar has highlighted “a clear failure to increase our tree cover in a substantial and sustainable fashion”.

The Government has promoted the Native Woodland Scheme, which has yielded 5,000ha of native Irish forests since 2001, and has increased supporting grants and premiums.

In spite of huge taxpayer-funded incentives for both private planting and planting by Coillte, afforestation rates have fallen from over 20,000ha in the late 1990s to about 6,000ha in recent years; the lowest in decades.

The State’s forestry research body Coford says we need to plant a minimum of 15,000ha per year up to 2030 to sustain our forest estate’s climate change benefits. Last year, 190 prominent scientists told the EU to ensure a clear preference for mixed species with an emphasis on native planting. This approach would have the immediate benefit of improving water quality, protecting soils, mitigating flooding and storing carbon as well as ensuring we comply with EU directives.