Snow falls in parts of North and North-West 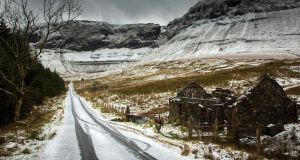 Black Friday proved to be a white one with snow in parts of the west and north west as a cold spell gripped the country. There was snow on the mountains in Derry, Donegal, Mayo and Sligo on Friday morning.

Met Eireann said the cold snap will continue until next week, with sub-zero temperatures forecast.

A national yellow weather warning for scattered snow showers and icy patches remains in place until midnight on Saturday. Saturday night will be cold and frosty with lowest temperatures falling to between minus two and two degrees.

Course closed due to over night snowfall. Our 13th, whilst not playable certainly is pretty!!!! #castlebar #golf #mayo #snow pic.twitter.com/WYljZstUlL

“Saturday will see further showers on the coast of the west and the north, most likely wintery, certainly over the hills and mountains but some down at the lower levels.

“Elsewhere the showers will be much more scattered and less frequent. There’ll be lots of clear skies but it will stay breezy and cold,” Ms Donnelly said.

“Generally temperatures will be between three and six degrees in the day over the weekend, but overnight it will go to below freezing,” Ms Donnelly added.

“It’s maybe a few degrees below the average for this time of year but it’s not anything phenomenal.”

Sunday evening will be milder with temperatures of between 8 and 10 degrees and outbreaks of rain. However temperatures of zero to five degrees with frost are forecast for Monday night.

Falls of several centimetres of snow were reported on hilly areas in the North West on Friday including the Ox Mountains on the Mayo/Sligo border and the Nephin range in north west Mayo.

A number of golf courses, including Castlebar, Co Mayo were unplayable because of snow cover. Farmers began moving livestock from hilly areas to lower ground in anticipation of further falls of snow .