Snow and ice warning issued as temperatures of -4 degrees forecast 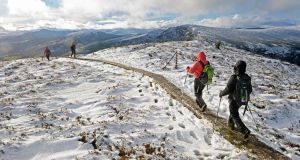 The heaviest snowfalls are forecast over counties in Connacht and in Ulster. Photograph: Eric Luke/The Irish Times

Met Éireann has issued a nationwide snow and ice warning as a “polar low” sweeps over the country over the next two days.

The yellow alert comes into force on Friday at 5am and will remain in place until midday on Saturday.

Snow showers are expected across the country during the alert but the heaviest snowfall is forecast for counties in Connacht and in Ulster.

Met Éireann said this “polar low” would begin to track down the country from the North. Friday and Saturday are set be bitterly cold, with widespread frost and ice and temperatures falling as low as minus 4 degrees.

A second weather warning is in place for low temperatures across the country.

Low temps of -3 or -4 degrees expected across the country tonight. Lower temperatures will mean roads may be icy. It takes longer to stop a vehicle in snow or on icy roads so #SlowDown, allow extra distance between you and the vehicle in front. #winterready pic.twitter.com/gflDPffbzM

In light of the warning, the Road Safety Authority (RSA) has advised all road users to take extra care.

The authority warned road users to watch out for black ice. “If the road looks polished or glossy it could be, black ice, one of winter’s worst hazards”.

“Black ice is difficult to see. It is nearly transparent ice that often looks like a harmless puddle or is overlooked entirely.”

Friday will be a bitterly cold and blustery day with wintry showers of snow, sleet and hail to fall through the day.

Frost is to be expected to set in soon after dark and will become “severe” later in the night.

The latest weather warning comes as many parts of the country recover from heavy rainfall on Wednesday.

The heavy rain led to flash flooding and road closures across the country on Wednesday, with the heaviest rain falling in the Dublin region.

Mountmellick in Co Laois was particularly badly hit by flash floods on Wednesday which forced dozens of families from their homes.

Two housing estates in the town were evacuated on Wednesday when the Owenass river burst its banks and dozens of families have been evacuated from their homes.