Brown bin waste for recycling increased by 22% in 2016, says EPA 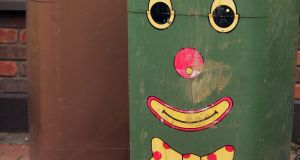 In 2016, 174,000 tonnes of brown bin waste were accepted at composting and anaerobic digestion facilities for treatment. Photograph: Alan Betson

The amount of waste generated and recycled through brown bins from Irish households increased by 22 per cent during 2016, according to the Environmental Protection Agency.

The latest data shows kitchen and canteen food waste and garden waste (including material arising from parks) accounted for 65 per cent of all biodegradable waste collected, totalling 353,000 tonnes .

Since 2016, waste collectors are required to provide brown bins to ensure waste food is collected separately where there is a local population of more than 500 people – most operators charge for collection.

In 2016, 174,000 tonnes of brown bin waste were accepted at composting and anaerobic digestion facilities for treatment. A total of 12 per cent more households had an organic bin in 2016 compared to 2015.

The waste is recycled by composting or subjected to anaerobic digestion which generates biogas, that can be used to generate heat or electricity. During 2016, 79 per cent of all the biodegradable waste was composted.

EPA senior scientific officer Stephen Treacy welcomed the significant increase in biodegradable waste being accepted for recycling at Irish composting and anaerobic digestion plants. “Segregating and separately collecting biodegradable wastes such as food and garden waste means that they can be recycled and reduces the amount disposed to landfill,” he added.

“Anaerobic digestion extracts additional value from organic waste due to the possibility of using the captured biogas,” Mr Treacy said. “This not only mitigates the effect on climate change but the biogas can displace fossil fuel use, increasing the amount of renewables being used in Ireland. ”

According to brownbin.ie,any of the following can be put into a brown bin:

- Meat, poultry and fish, including bones

- Leftover food from plates and dishes

- Out of date food with packaging removed (no glass/plastic)