Widespread flooding across the southeast after heavy rain 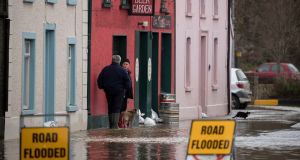 Torrential overnight rain which has caused widespread flooding across the southeast will give way to freezing conditions over the weekend.

Parts of Wexford, Wicklow, Kilkenny, Tipperary and Cork were hit by up to 50mm (two inches) of rain which fell on Wednesday night and Thursday morning.

Gardaí in Kilkenny advised motorists to avoid the Freshford area after the River Nuenna burst its banks. The village was impassable for some time.

Fourteen houses in the Johnstown Road area of Freshford were threatened by flooding. The emergency services arrived quickly on the scene with sandbags and got the houses boarded up just before the flood waters inundated the street.

One woman and her four-month-old baby had to be rescued when her car stalled in the floodwaters.

Fianna Fáil councillor Michael McCarthy said the banks of the river burst very quickly and council staff and the fire service worked through the night.

In the north of Kilkenny city, Bleach Road was left impassable due to flooding and the circular road in the city was flooded on Wednesday, according to AA Roadwatch.

The Callan-Goatsbridge Road was flooded east of Callan, Annamult Road in Bennetsbridge was impassable and both The Quay and Marshes St in Thomastown were impassable due to flooding.

In Tipperary there was flooding on the Faugheen-Carrick-on-Suir Rd (R697) at Cregg.

In Cork, the Park Road in Mallow, which is part of the N72 route, was closed due to flood as was the Edermine Bridge south of Enniscorthy in Co Wexford.

In Wicklow there was flooding at several locations on the Kilmacanogue-Roundwood Road, especially around Calary and the Roundwood-Sally Gap Road was impassable due to flooding.

It will be mild and breezy on Friday, but cold weather will set in for St Patrick’s Day. It will be a return to the cold air from the east though not on the scale that brought the country to a halt earlier in the month.

Temperatures in the east of the country will be just 1-3 degrees and 4-6 degrees further west.

It will be very cold Saturday night, with mainly clear skies and some snow showers in the east and southeast although amounts are looking small at this stage. Lowest temperatures will be between minus 1 and minus 4 degrees.

There will be a chance of sleet and snow on St Patrick’s Day with some small accumulations overnight because of the freezing temperatures.

Both Sunday and Monday are also set to be very cold with overnight lows of minus 5 with a widespread severe frost.

Temperatures over St Patrick’s bank holiday weekend will be between five and seven degrees down on the average for the time of year.