WHO to review risks after plastic particles found in bottled water 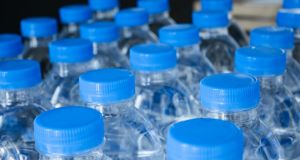 The study analysed more than 250 bottles from 27 lots and 11 different brands from around the world. Photograph: iStock

The World Health Organisation has announced it is to review the potential risks of plastic in drinking water after studies found micro particles in popular bottled brands.

The WHO initiative comes after a US investigation found that most of the 259 bottles of water tested were contaminated with microplastics.

The tests, carried out at the State University of New York in Fredonia and co-ordinated by US-based journalism organisation Orb Media, found an average of 10 plastic particles per litre of water, each larger than a human hair.

Microplastics are small plastic particles from a variety of sources including cosmetics, clothing, industrial processes, packaging materials and the degradation of larger plastic items.

It is known that microplastics are found in the environment at high levels, particularly in aquatic and marine ecosystems.

Researchers at the UEA pioneered a rapid screening method to identify microscopic plastic particles — as small as a few micrometres — in water by staining them using fluorescent Nile Red dye.

Dr Andrew Mayes, who led the research team at the UEA’s School of Chemistry, said: “We are becoming increasingly aware of microplastics in the environment and their potentially harmful effects, but their prevalence in other areas has been much less studied.

“They have been reported in tap water, beer and many other foods, but I think that people will be surprised that almost all bottled water appears to be contaminated too.

“This study analysed more than 250 bottles from 27 lots and 11 different brands from around the world, so it is the largest and most comprehensive study of water I know of to date, and almost all were contaminated to some degree.

“The method we pioneered here at UEA was used, and it is very pleasing to see it used to facilitate this type of large-scale study, which would have been hugely time-consuming and prohibitively expensive using conventional approaches.

“What the results don’t show is where these plastic particles are coming from - but I would expect that most is coming from the processing and packing process, though some may be coming from the original water source in some cases.

“What we do know is that microplastics are in the environment all around us — and they’re accumulating. They’re in the food web in our oceans, and now we know they’re in most of our bottled water too.”

There is no evidence that microplastics can harm human health but the WHO said it wanted to assess the state of knowledge.

Bruce Gordon, co-ordinator of the WHO’s global work on water and sanitation, told BBC News that the key question was whether a lifetime of eating or drinking particles of plastic could have an effect.

He said: “When we think about the composition of the plastic, whether there might be toxins in it, to what extent they might carry harmful constituents, what actually the particles might do in the body — there’s just not the research there to tell us.

“We normally have a ‘safe’ limit but to have a safe limit, to define that, we need to understand if these things are dangerous, and if they occur in water at concentrations that are dangerous.”