An Taisce urges Minister to intervene over ‘rebranding’ of Skellig Michael 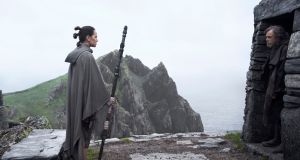 Star Wars on Skellig Micheal: visits on a permit system are meant to be capped at 11,100 annually but increased to 16,000 in 2017. Photographs: Lucasfilm

An Taisce has urged Minister for Culture Josepha Madigan to intervene over the “rebranding” of Kerry’s Skellig Michael as a “Disney-Lucasfilm fantasy film destination” by Fáilte Ireland.

An Taisce advocacy officer Ian Lumley says the monastic site’s Unesco world heritage status has already been affected by the environmental impact of the Disney Lucasfilm work, but a “cultural rebranding” poses an even “bigger threat”, with pressure to increase visitor permits to “unsustainable levels”.

As the national trust for Ireland, it has called on Ms Madigan to undertake an independent review of the impact of filming, a moratorium on further commercial filming there, and agreement with the Office of Public Works (OPW) to maintain visitor numbers at levels matching its world heritage site status.

It says the decision by Ms Madigan’s predecessor, Heather Humphreys, to allow Disney-Lucasfilm to use it as a location since 2014 has brought about the “effective rebranding of the island as a Disneyesque theme site”.

An Taisce’s complaint has also been copied to Minister of State for the OPW Kevin “Boxer” Moran and Minister for Transport Shane Ross.

With its 670 steps leading up to its sixth-century monastery, Skellig Michael is a national monument and world heritage site, and holds a number of designations, including a special protection area for its colonies of puffins, Manx shearwaters and storm petrels.

That status prompted Birdwatch Ireland and experts in heritage and archaeology to criticise the initial decision to permit filming for Star Wars there, spearheaded by the Irish Film Board, in 2014, and again in 2015. The island location was used briefly in The Force Awakens and more substantially in The Last Jedi, currently on release.

Visits on a permit system are meant to be capped at 11,100 annually under a State plan agreed with Unesco, but have increased since the first related Star Wars episode to more than 14,000 in 2016 and 16,000 in 2017, in spite of periods of bad weather.

The OPW is reviewing the length of the visitor season, following a commitment by Minister of State Kevin ‘Boxer’ Moran in response to local tourism interests who want to “maximise the dividend”.

An Taisce has asked Ms Madigan to ensure all publicity material by State tourist agencies promoting Skellig Michael “reflects the basis” of its Unesco designation.

Both Fáilte Ireland and Tourism Ireland have adopted a Star Wars theme and imagery from Skellig Michael and other west coast film locations to advertise the Wild Atlantic Way, at home and abroad respectively. As part of this, a Tourism Ireland video features actor Mark Hamill, who plays Luke Skywalker.

In a 26-page report to the three Ministers, An Taisce records in detail the impact on the location of use of drones and helicopters during filming, and the negative impact on puffins – already a threatened species – and other birdlife.

The report cites the cap on visitor numbers agreed in the State management plan, submitted to Unesco in 2008, and warns of safety issues related to any increase of visitors, with two fatal accidents on the rock in 2009.

“Almost every media reference to the Skellig now includes the Disney-Lucasfilm franchise brand,” Mr Lumley says in his covering letter.

“Had filming not targeted the Skellig monastic site and focused on building fantasy scenarios based around spectacular Irish Atlantic coastal setting – as Lord of the Rings did in New Zealand or Game of Thrones in Antrim/Down- there would be no issue,” he says, as “this would have been entirely appropriate for the promotion of the Wild Atlantic Way”.

“The core, and now irreversible, problem was in allowing the Skellig world heritage site to be hijacked,” he says.

An Taisce’s report notes that Skellig Michael is described as a “hero product” in Fáilte Ireland’s 2017 marketing plan, and has become almost “inextricably linked” to the Star Wars brand.

“The lobbying of a multinational company supported by a culturally indifferent Irish Film Board was allowed to prevail over cultural integrity,” Mr Lumley says, and this has effectively “undermined” the basis for its Unesco designation and placed it at risk.

“In the competition for landing permits in 2017, two external business consortia operating larger more powerful boats were successful to the exclusion of smaller long-standing local operators,” An Taisce’s report says.

This challenges the Fáilte Ireland claim that it brings a positive economic benefit to local businesses, it argues.

“An investigation of daily visitors actually landing on the island shows that those wishing to access the island for reasons of its own heritage now often have difficulty and are excluded by those who are visiting to experience the film location,” it notes.

Fáilte Ireland has said it is aware of the tourism impact on Skellig Michael and initiated a new “visitor experience plan” for the Skellig coast area earlier this year which aims to “bring the Star Wars benefit beyond Skelligs and increase visitor activity in the wider region surrounding the iconic attraction”.

The Department of Culture, Heritage and the Gaeltacht did not respond to a request for comment.