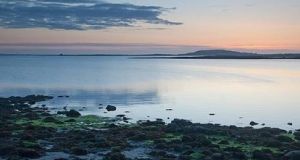 Minister of State for Housing Damien English has approved a foreshore lease for a controversial offshore energy test site in Galway Bay.

The Marine Institute has been granted a 35-year lease for a quarter-scale renewable energy test facility, along with test site “infrastructure” and “specified devices”, off Spiddal in Co Galway.

However, Mr English said public concerns were reflected in the final lease, which included “robust site specific conditions” that the Marine Institute must abide by.

Only one floating wind energy device can be deployed at any one time, and Mr English said the test period for specified devices, such as wave energy prototypes, would be limited to the first 10 years of the 35-year lease.

He said applications to test a device after the first 10 years had expired would require a separate foreshore licence application, and would be subject to “full consultation”.

“This will help to assure the public that this site is purely for testing of devices, and will not result in an offshore electricity generating station in Galway Bay,” Mr English said on Tuesday.

He said the Marine Institute must also provide a communications centre and community liaison officer to keep the public informed of activities at the site.

Over 500 submissions and observations were submitted to Mr English’s department, formerly Environment, when the Marine Institute initiated its plan to upgrade a test site first established in 2006. Its first lease expired in 2016.

Community concerns had been raised by the initial application for 60m-high wind turbines, which the institute then described as a “mistake”. It also planned to install up to three devices at the site at any one time.

The institute was criticised for the timing of a public consultation meeting just three days before the initial deadline for submissions. Under pressure from Galway West TDs, including Fine Gael’s Sean Kyne, former planning minister Simon Coveney extended the deadline twice.

Mr English said the aim of the quarter-scale test site was to allow ocean and renewable energy developers to “move from the drawing board” at University College Cork.

Galway Bay represents the step before the State’s full-scale, pre-commercial Atlantic marine energy test site off north Mayo. Mr English said there were currently 13 projects at various stages of development waiting for access to the site.

Welcoming the approval, Minister for Climate Action and the Environment Denis Naughten said his department was providing €4.75 million in funding next year through the Sustainable Energy Authority of Ireland for prototype development and test facilities in counties Mayo, Galway and Cork.

“I have consented to this application on the basis that there is no provision to export power from the test site to the national grid.”

He said very limited amounts of electricity would be generated by any energy devices tested on the site.

Last week Mr English approved mechanical harvesting for kelp in Bantry Bay, west Cork, the first such approval of its type for seaweed which is normally hand-harvested. Concern has been expressed by a campaign group which collected 12,000 signatures opposing the methodology.