A wildlife playground on life support

Only fragments of Barcelona’s Llobregat Delta remain. Can it be saved? 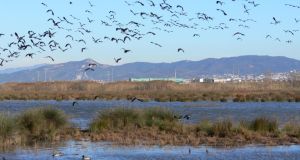 A black-winged stilt is high-stepping daintily through shallow water. Its almost absurdly long legs flash vivid red, scattering silver droplets in the sunlight with each movement. The bird is so close to the hide you could almost reach out and touch it.

A pair of little terns and a pair of ringed plovers share a small, gravelly sandbar nearby, their chicks skulking almost invisibly in patches of marram grass behind them. A great egret seizes a fish in a deeper channel, while a marsh harrier quarters the surrounding reed beds, hunting prey to feed its young.

This is a typical enough summer view from a hide in any Mediterranean wetland. Typical, that is, until the structure begins to shake as a Boeing 747 thunders overhead, so low you can see every detail of its wheels retracting after take-off. Look out the right-hand window of the same hide, and you don’t see birds: you see the end of a runway at the Barcelona-El Prat airport, the seventh busiest in Europe, barely a hundred metres away.

The hide begins to shake as a Boeing 747 thunders overhead, so low you can see every detail of its wheels retracting after take-off

This is not the only airport in the world to be built on drained wetlands. Their flat, open topography means that Homo Aviaticus and other species often compete for the same space worldwide for migration hubs.

What is remarkable about the remaining wetlands in the delta of the Llobregat river is that the Valdecans municipal council devotes significant, though still probably still insufficient, resources to their conservation. This despite the ever-expanding airport, and soaring demand for housing and agricultural land; some 10,000 acres were drained by farmers in the 19th century; they still provide 10 per cent of the Catalan capital’s fresh vegetables.

A half-dozen dedicated council staff, led by Juan Ramón Lucena Santacreu, strive to protect and restore a fragmented necklace of ponds, lagoons, marshes, coastal forests and beaches in the remaining 450 acres. The delta is an EU special protection area.

Some 359 bird species have been recorded in this cramped space, almost three-quarters of the total for the whole Mediterranean basin. Many rarities breed, including Audouin’s gull, bittern and Kentish plover. The Spanish pond turtle is also resident, as is an endangered fish, the Spanish toothcarp.

Small as the remaining semi-natural area in the delta is, and despite radical changes in its hydrology from upstream developments since the Roman Empire, its confluence of fresh water, rich in mineral sediments, and saline tidal surges from the sea, continues to sustain a rich variety of life forms.

The wetlands absorb water like a sponge, reducing flood risk for both the airport and Valdecans. They sequester and store carbon from the atmosphere, mitigating climate change

Lucena points out that the wetlands are valuable not only for diversity of species, but also for the services they provide to people. They absorb water like a sponge, reducing flood risk for both the airport and Valdecans. They sequester and store carbon from the atmosphere, mitigating climate change.

The pressure of public visitation is so great that access often has to be restricted, especially to the relatively fragile foredunes where the Kentish plover breeds.

Lucena argues that the economic value of wetlands today is consistently, across the world, much higher than the value of drained land, if all these elements are taken into account.

He astounded a mayor of Valdecans some years back, when he proposed that one-third of the beaches fronting the wetlands should no longer be “cleaned” mechanically, a practice that is the norm in Mediterranean holiday areas. The cleaning machines prevent dune formation, and the establishment of vegetation, as well as destroying the eggs and chicks of ground-nesting birds. Dogs also need to be excluded: they not only disturb wildlife but over-fertilise the sand with their excrement and urine.

Against the odds, he convinced the mayor to support his proposal. But he still lacks the personnel to police dog exclusion effectively. He appreciates that he gets more support from the council than most environmental officers do in the region. But he thinks it is long past time that councils everywhere accepted that conservation funding should not have to be pleaded for as an optional extra. A healthy wetland is as essential to the community’s well-being as road maintenance or street lighting, he argues.

The delta was not always appreciated. In past centuries, it was locally referred to as “Africa”, not a complimentary term at the time. Even today, one of its lagoons is officially known as Les Filipines (the Philippines), a reminder of its reputation as a remote, mosquito-infested swamp.

Lucena encourages schoolchildren to hold migratory birds and feel their beating hearts, to smell some of the 23 orchid species and myriad other plants in the dune forests

Today, Lucena leads schoolchildren into its ponds and channels, and encourages them to hold migratory birds netted for ringing and feel their beating hearts, to smell some of the 23 orchid species and myriad other plants in the dune forests.

“They think they have already seen all of nature on video,” he says, “so it is important for them to experience it directly, with their senses.”

He offers each visiting school a dozen of the endangered Spanish toothcarp, to breed in a classroom aquarium. It’s a daring strategy, but it works. They generally return the next year to release 100 fish.

“This way they get to create new life, to learn conservation values and grasp how to do science in practice.”

As we look out from the hide at the wetland birds, curiously undisturbed by the periodic aircraft noise, he reflects on the troubling issues that arise when managing such a small semi-natural remnant in an urban context.

“The tamarisk trees are spreading, and this is drying out some of the channels. This is a natural process, and nature is not a freeze frame, it keeps changing dynamically. We don’t want to turn this place into a zoo.

“But it is such a small fragment, we can’t let the tamarisks take over here; if it was bigger, a change in one section would not be so significant. And we have to control the water levels artificially, limit the flows of nutrients from surrounding areas. And we have to cull predators, such as foxes and wild boars.”

Like so many refuges for biodiversity today, the wetlands of the Llobregat delta are on life-support. While the patient is healthy enough at present, its future is entirely dependent on continued human commitment to its recovery.

Llobregat and the Bull Island: A case for twinning?

Dublin, like Barcelona, is very fortunate in still having richly diverse wetlands and dunes only 20 minutes from the city centre – in our case accidentally, through the growth of the Bull Island after the North Wall was built. The Bull has a lot in common, both in its wealth of species and in the challenges it faces – think dog control – with the Llobregat delta. Perhaps they should be twinned?

Getting to the delta

Driving from Barcelona towards El Prat de Llobregat, take the first exit after the airport to Remolar-Filipines; follow signs to the reserve car parks. But traffic can be very heavy, so it is simpler to hire a bike in town and take it on the metro to the airport, then cycle from there. Or you could take a taxi, or simply walk, from the metro station – it’s only about 20 minutes to the reserve entrance. But be sure to bring water and sunscreen.